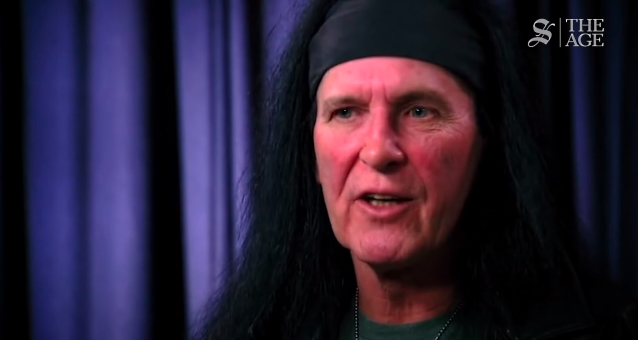 Tom Compagnoni of The Sydney Morning Herald recently produced and published a short documentary on the Sydney origins of AC/DC, interviewing several members from their very early lineups, several of whom have never told their story on camera before now.

All the video's participants reflect on the role that Sydney played in the development of the band and the fact, that, in contrast to other Australian cities, no statues, plaques or laneways dedicated to the band exist in their original hometown.

The documentary features interviews with:

* Noel Taylor (AC/DC drummer 1974) in his first video interview, talking about the first time Angus performed in his schoolboy outfit, as well as making the first known live recording of the band.
* Rob Bailey (AC/DC bass player 1974) in his first video interview, talking about the filming of the bands first video clip "Can I Sit Next To You Girl" as well as the recording sessions for the bands debut album "High Voltage".
* Tony Currenti (AC/DC session drummer, 1974) 45 years after laying down the drum tracks on AC/DC's debut album, "High Voltage", Tony Currenti continues to work in his Penshurst pizzaria.
* Mark Evans (AC/DC bass player 1975-77),talking about the family home of Malcolm and Angus Young in Burwood and the recording of the band's early albums at Albert Studios on King St, Sydney.

The entire video can be viewed below.

Last year, original AC/DC singer Dave Evans said it felt "fantastic" to be one of the five founding members of the band.

During an appearance on Chile's Radio Zeta, Evans was asked how it feels to know that he was once part of one of the most legendary bands in rock. He responded: "It feels great. It feels fantastic. It's amazing [to be] part of world rock history. There's been quite a lot of players through AC/DC — way over 20, sort of thing — but there's an exclusive club within those players: the five founding members of the band. There can only ever be five in that club, and I'm one of 'em. So, it's fantastic."

This past December, Evans took to his Facebook page to shoot down rumors that he was hoping to come back to AC/DC, explaining that "the real essence of the band" died when founding rhythm guitarist Malcolm Young passed away in November 2017.

Evans was replaced in 1974 by Bon Scott, who sang on AC/DC's first six studio albums and became a legend himself after his death in 1980.