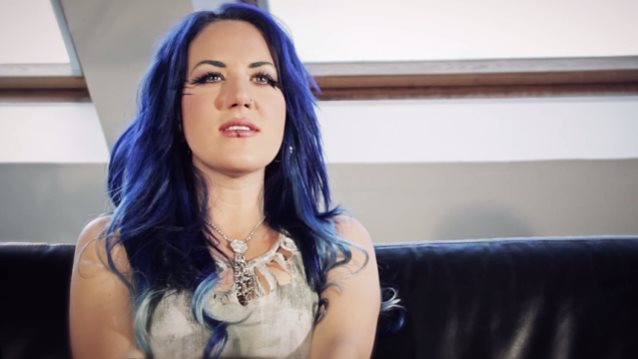 ARCH ENEMY/ex-THE AGONIST vocalist Alissa White-Gluz was interviewed on the June 6-8 edition of Full Metal Jackie's nationally syndicated radio show. You can now listen to the chat using the Podbean widget below.

Full Metal Jackie: Obviously, a lot of excitement about this new ARCH ENEMY record, "War Eternal", which is coming out on June 10. It's your first album with ARCH ENEMY and also the first one with Nick Cordle on guitar. Was there a lot of discussion about maintaining any particular style? Or were you both encouraged to really infuse a lot of yourselves into the music?

Alissa: I think we were both encouraged to bring our strengths to the band. Because Michael [Amott, guitar] is the main songwriter, I think the style remained the same just naturally, because most of the band is still the same. But yeah, nobody tried to shape us or change us in any way. We were really chosen to be a part of this band for our… what we contribute to music and what our strengths are. And so we brought that to "War Eternal".

Full Metal Jackie: Alissa, what excites you most about now being able to influence another generation of metal fans with the very same band that actually inspired and influenced you?

Alissa: Well [laughs], it's a very deep question. It's a great band. I feel very fortunate to be in a position where I can actually continue to make music and have people appreciate the music that I do make. I have a lot of things that I think are important to me, a lot of different causes, that I like to talk about also. When I hear from fans that they not only like the music but they are also very touched by the lyrics, or they also learned about a specific cause or something because of me, that's really, really rewarding — that's, like, the most rewarding thing in the world. So, yeah, it's really, really quite an honor, actually.

Full Metal Jackie: Not many vocalists have the situation of their predecessors still being actively involved in the business side of the band, which is the case here with ARCH ENEMY. Angela [Gossow, ARCH ENEMY's previous vocalist] is still active on the business front [as ARCH ENEMY's manager]. Does that give you an added sense of security or is there some nervousness that she'll be listening?

Alissa: No. It's definitely not nervousness, it's security, for sure. She knows exactly what's needed for the band. I mean, who could manage the band better than someone who's already been in it and been there, done that, done all the touring. And plus, she's been the manager of the band for a long time, so it's actually really, really a great situation that I have. Angela is still here working with me and with the band, 'cause she has a lot of wisdom that just some other manager that might just step into the project really wouldn't know.

Full Metal Jackie: Alissa, getting ready to tour the new "War Eternal" album, what has it been like to rehearse with the band and make those catalog [ARCH ENEMY] songs yours?

Alissa: Well, I'm gonna go for rehearsals in a a couple of weeks, actually. But I did rehearse them a few months ago and I just gained a whole new respect for those songs when performing them with the band. 'Cause I always appreciated them as a fan, I always appreciated them from a listener's perspective, but from a performer's perspective, it's a completely different story. They're really very, very intricate songs and really, really well structured, really solid. I wanna just keep those songs as true to the original as possible.