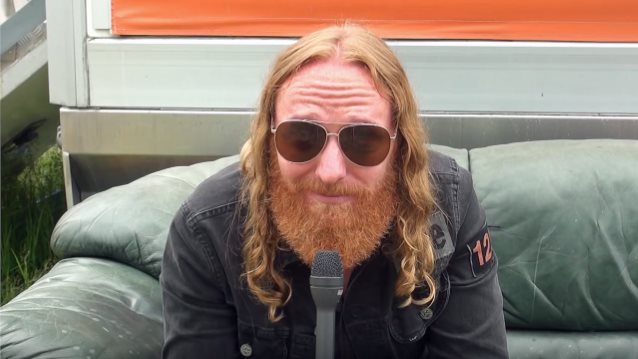 New DARK TRANQUILLITY Album Is 'Shaping Up To Be Fantastic,' Says MIKAEL STANNE

Kaaos TV conducted an interview with vocalist Mikael Stanne of Swedish melodic death metallers DARK TRANQUILLITY prior to the band's June 25 concert at the Nummirock festival in Nummijärvi, Finland. You can now watch the chat below. A couple of excerpts follow (transcribed by BLABBERMOUTH.NET).

On the recording process for DARK TRANQUILLITY's upcoming album:

On why it was so difficult for DARK TRANQUILLITY to come up with a new album's worth of material that they were happy with:

Mikael: "This is gonna be our eleventh album, [and] for yourself, you feel, like, 'My God! We don't wanna repeat ourselves. We don't wanna do the same thing over and over again. We wanna do something new.' It has to feel fresh, and it has to feel different. And how do you find the inspiration and stuff like that? It is kind of tough. But we got started, and eventually, it's, like, 'Holy shit! We're on to something here.' And it started feeling really good, and now it feels awesome. Some of the songs are incredible. I've recorded vocals for five songs already. We have tons more. And I can't wait to finish it. It's gonna be so much fun. There's basically just keyboards and guitar solos and vocals left. So it's gonna be a couple of more weeks, I think. So it's gonna come out in November."

On whether he can reveal the title of the new DARK TRANQUILLITY album:

Mikael: "It is too early [for that], but it's gonna be revealed, I think, in a couple of days. I'm not sure. But it's pretty damn soon, I promise you. We just decided on a title, like, two days ago, and Niklas [Sundin, guitar] just finished the cover artwork and stuff like that. So that's gonna be out in a matter of days, or a week, or something like that."

On how DARK TRANQUILLITY's recent lineup change affected the songwriting process for the new album:

Mikael: "[Bassist] Martin Henriksson left the band in January, and that was a big blow. I mean, he used to write tons of stuff for the band, but in the last couple of years, he has kind of focused on other things. He's more like a manager for he band — he arranges all the festivals and trips and everything like that — and he just kind of fell out of love with touring and writing and playing, so now he's a full-on manager and stuff."

On whether he knew that Martin Henriksson would leave the band before it happened:

Mikael: "I didn't know, but maybe I suspected, and maybe I felt it. But it was still a shock to me."

Mikael: "He's an old friend. I've known him for ten years or so. And he's a super-great guy. So he's gonna fill in now for this summer, and then we'll see what happens. So he's kind of temporary in the band right now. We're weary about that kind of stuff. We don't wanna have people just come into the band for a short while, and if it doesn't work, then you're out. So it's like a temporary basis kind of thing. We're kind of scared of commitment right now. It's also a lot of fun taking friends out on tour. Like Jens I've known for such a long time, but we've never traveled anywhere together. Now we can travel the world. So it's actually awesome."

On how the songwriting process was different this time around:

On whether DARK TRANQUILLITY had a vision of where they wanted to take the band with the new album:

Mikael: "It's something that happens. I mean, sure, you can have your individual idea about what you wanna do, but then it's really hard to put that into words or at least put that into something that we can all agree on. So we just go, like, 'Hey, this is my idea.' 'It sounds kind of cool.' And then we make it into a DARK TRANQUILLITY idea, and all of a sudden, everybody agrees on it. So this album really kind of grew together. Like, the first couple of songs, we were, like, 'It's getting there. Let's see what we can do to fix it.' And then we started fixing things and rearranging stuff, and eventually, it's, like, 'All right. We've got something here.' And then we started working around that. So, yeah, it kind of grows organically in a cool way."

On how the new DARK TRANQUILLITY album compares to 2013's "Construct":

Mikael: "It's definitely different, but I guess that's the closest album to it, just because it's the most recent. But I'm not really sure yet. I'm still kind of right in the process, so it's hard to be objective about it. I think about the songs every single hour of the day, so it's hard to kind of take a step back and actually listen to it and see what it is."

An audio sample of a new DARK TRANQUILLITY song can be heard below.