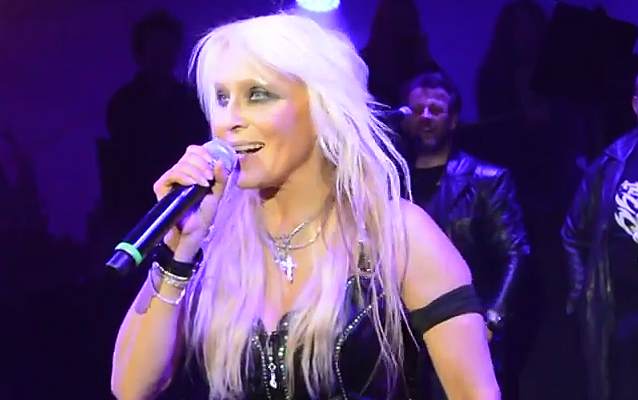 Metal Life magazine recently conducted an interview with German metal queen Doro Pesch. You can now listen to the chat in the YouTube clip below. A couple of excerpts follow (transcribed by BLABBERMOUTH.NET).

On people using their iPhones and smartphones are concerts to either film the performances or communicate with others:

Doro: "When [I am] on stage, I see immediately when people start texting or sending messages. And then, just standing near the people, then you feel [like] they're not there anymore, it's very distracting and it puts a lot of pressure on you. Usually, it was, like, back in the day, the first three songs, the photographers could take photos, maybe sometimes five songs, and then it was over, and then the show started. And now it's, like, you're under the microscope constantly for two or three hours, and it's a different animal. Of course, you have the make the [most] out of it, but I definitely prefer when everybody's there — first two or three songs, do some pics and then go and headbang and stage dive, crowdsurf. But yeah, it can take away a little bit the energy flow and the connection."

On when fans can expect to hear the follow-up to Doro's 2012 album "Raise Your Fist":

Doro: "Yeah, we're in the middle of songwriting. We've got some great, ass-kicking ideas already. And we are doing the production for the DVD — it's the 30th-anniversary DVD, and we filmed all over the world. We started with Wacken, which looks awesome, and then we did a couple of things in my hometown, in Germany, in Düsseldorf, and in New York. And it will come out in autumn, and it will be a big package — like, two DVDs and one live album. Many more months it will probably take to do a new album, but songwriting is already going really great. And it probably takes another year to have a brand new album. But the DVD is coming out first… Good things always take longer than expected, and sometimes I wanna do it fast, and then two years go by, and I say, 'Wow!'"