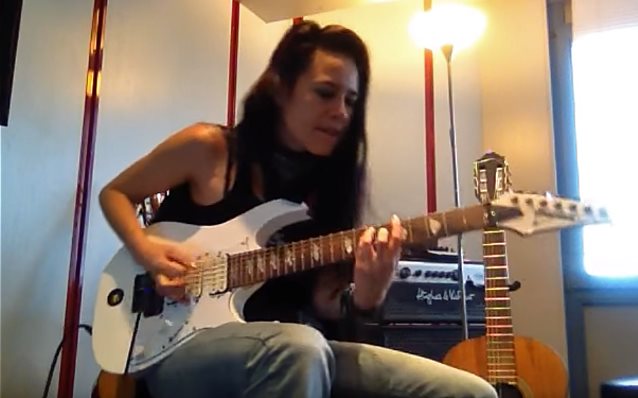 Video footage of new EVANESCENCE guitarist Jen Majura (EQUILIBRIUM, KNORKATOR) playing the band's song "Call Me When You're Sober" can be seen below.

Majura recently told EMP Rock Invasion about how she landed the EVANESCENCE gig: "I have no idea. [Laughs] No, seriously… My name was somehow recommended by a sweet friend of mine, Alex Skolnick of TESTAMENT, and Dave Eggar — he's also known as a very good cellist, and he's a musician working in New York. And all of a sudden, there was this e-mail popping up: 'Are you interested in joining…?' And I was, like, 'What the fuck?' So I stopped breathing until my face turned kind of blue. And then afterwards, I was, like, 'Okay, I've gotta read it again.' Three days later, I found myself suddenly on an airplane, flying over to New York to meet Amy Lee. And we had some very, very cool talks. She's an awesome person. She's a very, very great musician. And so I found myself suddenly inside of his empire called EVANESCENCE."

On the topic of how her life has changed since it was announced that she was joining EVANESCENCE, Jen said: "Well, I have to say, it became official the 7th of August. I have to say, in that moment when it went online, I was in Sweden for a guitar camp. It was in the middle of nowhere; there was nothing but a lake and thirty guitar players. And suddenly, all of a sudden, my phone kept [lighting up with message notifications]. I was, like, 'Okay, maybe it's official now.' What happened is that I received tons of e-mails every day; it was insane. It became okay in the meantime, but in the very first days, it was, like, between 1,200 and 1,500 e-mails every day. And, of course, a lot of people [congratulated me], and this is very sweet. I would like to say now, thank you to all of my colleagues and friends and partners in business and everybody who just [congratulated] me on that. It was like having a birthday or something."

EVANESCENCE re-emerged after a three-year hiatus with select, intimate shows in November in Nashville, Dallas and Los Angeles. The influential, Grammy-winning band also played at Ozzfest Japan, the first major international music festival to ever travel to Japan.