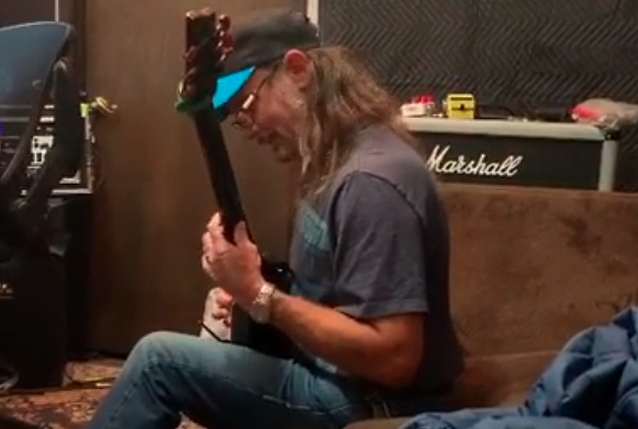 Ex-EXODUS guitarist Rick Hunolt has recorded a guest guitar solo on the band's upcoming album, tentatively due in early 2021 via Nuclear Blast.

Hunolt's appearance on EXODUS's next disc was revealed by EXODUS guitarist Gary Holt, who shared a short video of his former bandmate putting down his track in the studio.

Holt wrote in an accompanying caption: "Rick Hunolt laying down a SICK guest solo on this record! And by the way, MY TRACKS ARE DONE!!!!!"

Back in April 2019, Hunolt rejoined Holt and other EXODUS members Tom Hunting (drums) and Steve "Zetro" Souza (vocals) to perform several of the group's classic songs during a METAL ALLEGIANCE concert in San Francisco, California.

EXODUS's last album, 2014's "Blood In Blood Out", was notable for featuring a guest appearance by former EXODUS guitarist Kirk Hammett, who left the band in 1983 to join METALLICA.

Three years ago, Hunting was asked by Metal Wani if the next EXODUS disc could include another collaboration with Hammett. He responded: "We'll bring Kirk back, if he wants to come in and do a solo, for sure. And there might be a Rick Hunolt sighting on the new record too; you never know.

"At this point, we feel like it's good to celebrate the history of the band and all the important people that have been in the band along the way," Tom explained.

EXODUS's new album is being recorded at a studio in Lake Almanor, California. The LP will be the group's first since the completion of SLAYER's final tour. In 2011, Holt began filling in for Jeff Hanneman at SLAYER live shows, and became the band's full-time co-guitarist as of 2013, while remaining a member of EXODUS.

Rick Hunolt laying down a SICK guest solo on this record! And by the way, MY TRACKS ARE DONE!!!!!