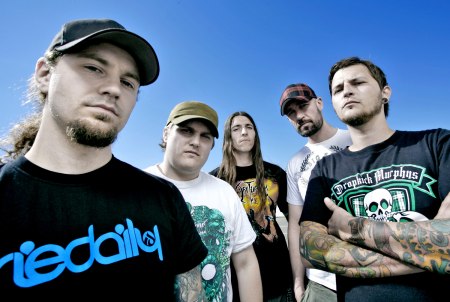 On September 28, Aniruddh "Andrew" Bansal of Metal Assault conducted an interview with vocalist Esben "Esse" Hansen of Danish thrashers HATESPHERE at the Key Club in West Hollywood, California. You can now listen to the chat using the audio player below.

Hansen joined HATESPHERE as the band's new singer in June. In addition, the group parted ways with bassist Mixen Lindberg and temporarily replaced him with returning HATESPHERE member Mikael Ehlert (who will remain with the group until the end of 2010). Hansen commented at the time: "It didn't take me much time to decide that I wanted to be the new singer of HATESPHERE. Besides making some of the best metal music on Danish soil, HATESPHERE is one of the coziest bands in Denmark. And I'm very excited to be a permanent part of it all."

Added guitarist Peter "Pepe" Lyse Hansen: "After having searched up and down and in between, we're honored to present Esse as new frontman in HATESPHERE. He's got the qualities that we have been looking for but which have shown very hard to find. He's got a brutal varied voice that will be a pleasure to hear in HATESPHERE. He's got the necessary experience you will only get by playing tons of shows in front of big and small crowds. He knows what he is getting into — and last but not least, he's a great guy!"

HATESPHERE is currently taking part in a six-week North American tour in alongside headliners NEVERMORE and WARBRINGER.

HATESPHERE's latest album, "To The Nines" entered the official chart in the band's home country at position No. 36. The CD was recorded over a nine-day period at Antfarm Studio in Aarhus, Denmark with producer Tue Madsen (THE HAUNTED, MOONSPELL, DARK TRANQUILLITY, GOREFEST).