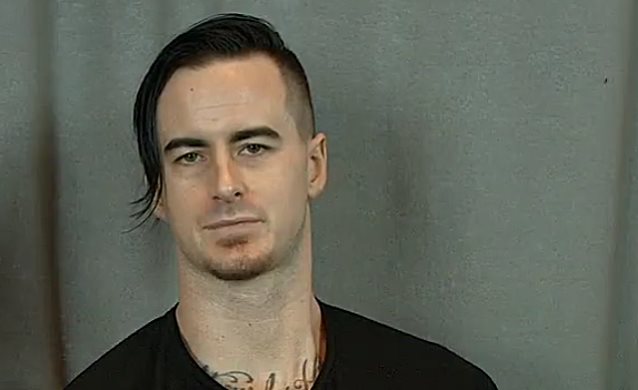 Grasser Production conducted an interview with IN FLAMES guitarist Niclas Engelin and drummer Joe Rickard on March 26 in Munich, Germany. You can now watch the chat below.

Asked how he landed the drummer gig in IN FLAMES after playing on the band's new album, "Battles", as a session drummer, Joe said: "[I was] probably [in the] right place at the right time. I had taken a little break from touring for a while and I was doing a lot of session work and studio work and things like that. And so it was just a normal thing for me to come in and do a drum session for a band. And so [producer] Howard Benson hired me to work on the album, play drums on the album, things like that. So, for me, it was just another project. Obviously, I was excited about it, but it was just another thing. So I had no idea that they were wanting to hire an American to be in the band and that they would be interested in me. I just did my best and had fun making the abum, and we had a great time while they were there. There was tons of barbecue and VAN HALEN; that's basically what they did the whole time. And so it was very unexpected when they asked me if I would wanna do it. And, of course, you say 'yes' when IN FLAMES ask you to be their drummer. You don't really say 'no' to that. I should have said 'no' to mess with them though."

Drummer Daniel Svensson announced in 2015 that he was leaving IN FLAMES to focus on his family life.

More recently, bassist Peter Iwers issued a statement in November saying that he was leaving IN FLAMES at the end of the recent U.S. tour "to pursue other endeavors." His replacement is Håkan Skoger, who has previously played with PASSENGER and GARDENIAN.

IN FLAMES vocalist Anders Fridén told EMP Rock Invasion about Rickard's addition to the band: "The thing is, we went into the recording of ['Battles'] with the intention that we would get a guy later. There's so many studio musicians in L.A. that can record this stuff anyway. We're not a complicated band, so anybody can do what we do. So he was in the studio, recommended by Howard, and he was helping us out with some programming before. And he said, 'I'm here. I can play.' And we were, like, 'Sure. You can try. Just go ahead.' And then he started to hit the drums, and we were, like, 'Woah! This guy plays hard!' And he did a few takes, and we said, 'Move on. Do the next song.' But he wanted to continue to record. And we were, like, 'That's the right attitude.' Then we had to take a few beers with him to understand the guy behind the drum sticks, and he was an all cool guy. And after the whole recording, [we said] 'You recorded this album. Do you wanna be a part of this band?' And he said 'Yeah.' [It was] a very smooth transition."