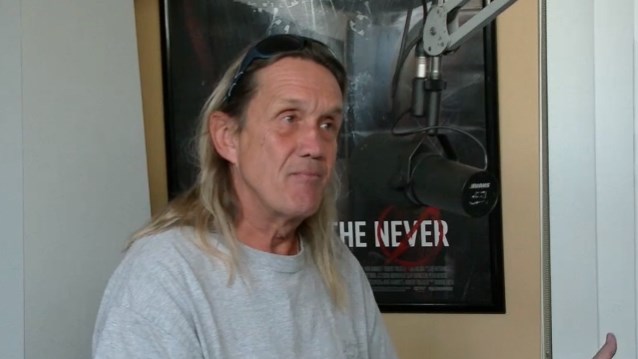 IRON MAIDEN drummer Nicko McBrain was interviewed earlier this week in the studios of the 98.7 The Gater radio station in West Palm Beach, Florida. Asked for a health update on IRON MAIDEN singer Bruce Dickinson, who recently underwent a seven-week course of chemotherapy and radiology to treat a small cancerous tumor at the back of his tongue, Nicko said (see video below): "We were all blown away when we heard the news. But the great thing is [Bruce is] in great hands back home in England, not only with his family, but his oncologists and all the people that are working with him. They were all very positive, as Bruce has been, through the whole thing."

He continued: "Obviously, it's a blow for everybody to hear the news. Last week, the official announcement was made, after he finished his treatment. And all of that treatment went exceedingly well. And from not having spoken to Bruce for a couple of weeks, but talking to our manager, he was in amazing spirits, considering the brutality of the radiology, and he had three chemo sessions. So it's been pretty hard, as you can imagine. And he's apparently doing very well. He was in the office Wednesday last week, and apparently he went out. He goes down the pub… although he can't taste his beer. He said, 'At least I know it's a Trooper [IRON MAIDEN's official beer]. I've got the bottle in my hand.' [Laughs] I said, 'Does it still work?' 'Oh yeah!' [Laughs]"

McBrain added: "So, just to let everybody know, from what we can gather, he's really in great hands, and he's doing extremely well. So we expect him to have a full recovery in the next couple of months. And then, watch this space, really. We have made an album. The album was ready to go this year… and it still is. When I say 'was,' we were planning on going out and doing some work around the album, which now, we're all just holding on, and once Bruce is up and running, hopefully in the next couple of months, we'll… You never know when this might happen. You just never know, do you? [Laughs]"

IRON MAIDEN has yet to make an official announcement about a new studio album, but the band's members have reportedly been spotted in Paris, France in recent months, along with their longtime producer, Kevin Shirley, who is said to have helmed the new effort.

MAIDEN's 15th studio album, "The Final Frontier", sold 63,000 copies in the United States in its first week of release to enter The Billboard 200 chart at position No. 4. The CD featured 10 tracks that had an average running time of seven minutes and 40 seconds, with the shortest song, "The Alchemist", clocking in at four minutes and 29 seconds, and the longest, "When The Wild Wind Blows", lasting ten minutes and 59 seconds.