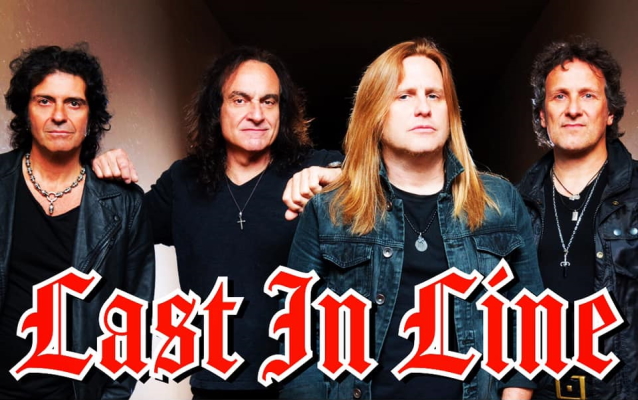 New LAST IN LINE EP To Include THE BEATLES Cover

LAST IN LINE drummer Vinny Appice spoke to Robert Cavuoto of Metal Rules about the status of the band's third studio album. He said (as transcribed by BLABBERMOUTH.NET): "We just finished the CD. Chris Collier, who mixes a lot of KORN stuff, he did our albums. He just finished the mix. And it sounds fantastic. And that's coming out next year on the earMUSIC label. And we have an EP coming out in the next month or so on earMUSIC as well. And that EP has a cover version of a BEATLES song we did. It came out great. Something different. And a new song, one of our new songs, and then two live tracks. And then we're doing dates starting the end of September into the rest of the year."

This past May, LAST IN LINE bassist Phil Soussan told SiriusXM's "Trunk Nation With Eddie Trunk" that the band's new EP is "very special. There's something very, very cool about it — and there's gonna be a great video that goes with that," he said.

The news of LAST IN LINE's partnership with earMUSIC was shared five months ago by Appice during a appearance on "Waste Some Time With Jason Green". Vinny also revealed that LAST IN LINE completed recording six more new songs in late January at Danny "Count" Koker's Desert Moon studios in Las Vegas, Nevada.

In June 2021, Soussan spoke to Metal-Net.com about the progress of the writing and recording sessions for LAST IN LINE's third album. "I've been quite motivational with the band," Phil said. "I'm trying to keep things happening. We wanted to work on a few different aspects [during the pandemic]. And we also had to go about getting a new record deal — we were changing labels — so that's something we're in the process of doing, and we're getting pretty close now. But part of that was writing a third record. So we've been hard at work trying to write a third record and even record that third record while we've been in different locations around the world. And, obviously, this band works as a unit in every sense of the word, so it's a real handicap not being able to be in the same room as everybody and trying to make it happen."