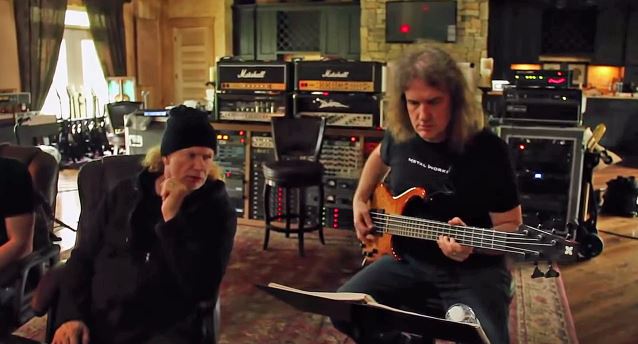 Grammy-winning country singer Steve Wariner has revealed to The Tennessean that he recently recorded a steel guitar part for a MEGADETH song. Wariner met MEGADETH mainman Dave Mustaine in the recording studio, after which Mustaine came to see Wariner perform.

"Worlds collide," Wariner said. "It's funny. Imagine MEGADETH with steel guitar. That's what I did, and Dave Mustaine is the nicest guy in the world. Isn't that crazy? It's out of my world. You know me, I'm a traditional country guy. But the stuff I played on is awesome."

MEGADETH was joined by Jamey Johnson for a performance of Jones' song "Wild Irish Rose".

Mustaine and his family moved to Tennessee last October after living in Fallbrook, California for many years.

The new MEGADETH album will be the band's first to feature LAMB OF GOD drummer Chris Adler and Brazilian guitarist Kiko Loureiro, best known for his work with ANGRA. Songtitles set to appear on the CD include "The Emperor Has No Clothes", "Tyranocide" and "Poisonous Shadows". The latter track features piano playing from Kiko as well as orchestration from famed Nashville arranger Ronn Huff, the father of former MEGADETH producer Dann Huff. MEGADETH also recorded two cover versions during the sessions for the new CD: "Melt The Ice Away" by BUDGIE and "Foreign Policy" by FEAR.