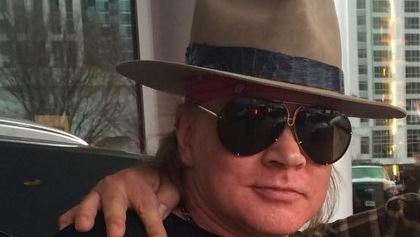 A GUNS N' ROSES fan has posted a photo on Instagram that he says shows him standing next to the band's lead singer, Axl Rose, in Atlanta yesterday (Friday, March 18).

Mark Guglielmo, who goes by the handle "notonestraw" on Instagram, went on to say that Rose told him GUNS N' ROSES — which recently reunited with guitarist Slash and bassist Duff McKagan — was planning to do "a whole tour" after the band's recently announced comeback shows.

GUNS N' ROSES has six concerts scheduled so far, all in April: two at the Coachella Music And Arts Festival, two in Las Vegas and two in Mexico City. The exact band lineup has yet to be confirmed.

Guglielmo said he wished Rose good luck on those "few shows," but that the singer responded "thanks, man, but we're going to do a whole tour." Guglielmo added in the comment thread accompanying the photo: "I don't want to speculate or spread rumors, but it really looked like he's been working out a lot. His arms looked muscular."

The lineup for GN'R's April shows has been the subject of intense speculation ever since the first of the dates were announced, at the Coachella Music And Arts Festival in Indio, California.

From the start it's been rumored that original GUNS members Izzy Stradlin and Steven Adler would not be part of these shows or a possible stadium tour this summer.

Stradlin recently confirmed on Twitter that he has no involvement in the GUNS shows, while Adler has remained silent.

The rest of the band's lineup for the shows — and a potential tour later in the year — remains unclear, although keyboardist Dizzy Reed, drummer Frank Ferrer and guitarist Richard Fortus are all believed to be involved.