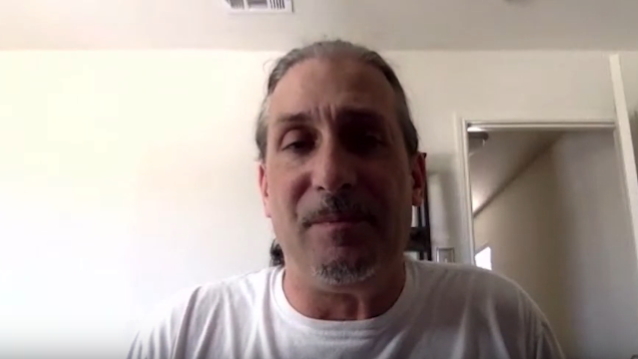 Johnny Kelly recently spoke to the "Who's Your Band?" podcast about what it has been like stepping into QUIET RIOT as the band's new drummer following last year's passing of Frankie Banali.

Kelly, who has previously played with DANZIG and TYPE OF NEGATIVE, among other groups, said that he initially had no idea that he would eventually become Banali's permanent replacement in QUIET RIOT.

"Since [2019], after [Frankie] got diagnosed and he was going in for treatment, I covered for him for a bunch of shows," Johnny said (see video below). "And it was always under the premise that I would be just covering for him, and then, when he was well enough, he would just come back and play in the band — get back to work. So it wasn't like a real timeline. I did a bunch of shows, and then there was some stuff on the West Coast where Frankie didn't really have to travel far, and it wasn't so much of a grind for him, and he played those shows. And then Alex [Grossi, QUIET RIOT guitarist] had called me, and he was, like, 'Frankie can't make a couple of shows.' One of them was Sturgis. There were a couple of gigs in the summer [of 2019]. They just told me, 'Frankie can't make it. Can you do the shows?'

"I'm friends with Frankie; I've known Frankie a number of years now through Alexi," Johnny continued. "We were Facebook buddies. We would always talk about drums and stuff like that. And then when he realized that he wasn't gonna be able to play anymore, Frankie said to call me, to finish whatever dates there were coming up and stuff like that. But even at that time, it wasn't a thing of Frankie has days or — where it was coming down to the wire for him. It was, 'He can't travel. He's not up to it this week. Can Kelly do the shows?' And then it just turned around, boom, he's gone."

According to Kelly, his gig with QUIET RIOT has taken on a new meaning now that Banali is no longer with us.

"[Frankie] was always a nice guy. Like I said, I got to hang out with him and spend time with him a bunch throughout the years after I met Alex," Johnny said. "Now it is kind of strange in a way, where the purpose of what I was doing with the band has completely changed now. It's kind of awkward and weird, and then at the same time, it's an honor and there's a certain amount of responsibility that comes with it now. It's not just filling in a gig, covering things while Frankie is out, going for chemo. The responsibility of his legacy is now part of my responsibility. So there's a little more weight to it."

QUIET RIOT played its first concert after Banali's death on October 9 at at the Grand Stage Amphitheater near Urich, Missouri.

At some of QUIET RIOT's 2019 and 2020 shows, Banali was replaced by Kelly or Mike Dupke (W.A.S.P.), depending on each musician's availability.

Bassist Chuck Wright has been a part of QUIET RIOT, on and off, since 1982, having initially been involved in the "Metal Health" recordings (he played bass on the tracks "Metal Health" and "Don't Wanna Let You Go"). Grossi was in the last version of the band, from 2004 through 2007, before Kevin passed away, and was asked by Banali to return in 2010.