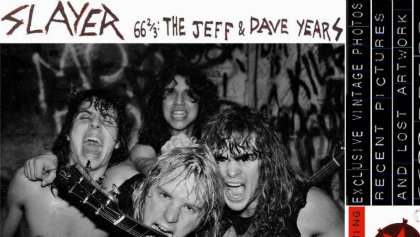 Available exclusively via Amazon, the full-length book is available worldwide now, as an e-book that can be read on any smart phone, tablet, or computer that can run the free Kindle app. For a limited time, the electronic version costs $6.66 (US).

"If you have a device that you can use to check Facebook, you can be reading the book minutes from now," says Ferris.

A 320-page paperback version will be available later in the month. The electronic version features extensive hyperlinks to (non-copyrighted) supplemental material.

The exhaustively researched look at the band's career (to date) features 59 chapters, 400 footnotes, 3 appendices (in the e-book, 2 in the paperback),33 photos, 11 illustrations, a full works cited section, and an index.

The photos include striking, previously unseen images by Harald Oimoen, of renown for the Bay Area thrash yearbook "Murder In The Front Row". Illustrations include lost artwork and an early flyer by Albert Cuellar, the "Live Undead"/"Hell Awaits" cover artist who went on to work with Tim Burton, SUBLIME, and Sir Mix-A-Lot. The book also includes Jeff Hanneman's original diagram for the "Live Undead" cover (spoiler: it's stick figures).

David Konow, author of the heavy metal history "Bang Your Head", writes: "This book is the biography the band has always deserved. 'Slayer 66 2/3' goes in deep, covers an enormous amount of ground, and it was clearly a labor of love. Metal is an important part of music history, and SLAYER will always be one of the most important bands in the genre. A book documenting the good, the bad, and the ugly without spin or sensationalism has been long overdue."

Ferris wrote the first English-language book about SLAYER, Bloomsbury Academic's "Slayer's Reign in Blood" (2008),which is part of the prestigious "33 1/3" series of volumes about classic albums. A documentary in book form, it details the creation and legacy of SLAYER's major-label debut.

The timely "Slayer 66 2/3: The Jeff & Dave Years…" is the rest of the story (so far). It's a much bigger prequel, sequel, companion, and update. It spans from the members' childhoods to the fall 2013 old-school tour.

Ferris began writing it in March 2013, shortly after iconic drummer Dave Lombardo left the band. And he continued covering the story after founding guitarist Jeff Hanneman unexpectedly passed away on May 2. And he stayed with it through memorial services, lineup shakeups, and breaking developments. The book's final photo was taken Wednesday, November 20, in Pittsburgh.

"It answers two questions," says Ferris. "One, how did SLAYER happen? And two, why is Dave Lombardo — the most influential and acclaimed drummer in the history of metal — no longer playing with the greatest thrash band?"

This thorough, character-driven look at SLAYER's unrivalled career is based on original and archival interviews with the band, witnesses, employees, label executives, fans, and peers. Cross-referenced research includes song credits, concert counts, and profiles of the band's albums, from beloved classics to more divisive releases.

"Some leading metal writers have written some great pieces about SLAYER," says Ferris. "They should all be read, and I include a list of them. But nobody will ever spend this much time and effort on a SLAYER book again."

Ferris is an Ohio Society Of Professional Journalists reporter of the year. He has written for The AV Club, RollingStone.com, Decibel, Alternative Press, Metal Sucks, Cleveland Scene, and other periodicals. 2013 marks his 28th year in the music press, if you count his letter Hit Parader published in fall 1985. He was thrown out the "South Of Heaven" tour when a misdirected crowdsurf landed him onstage.

The first six and a half chapters can be read at the book's Amazon page. 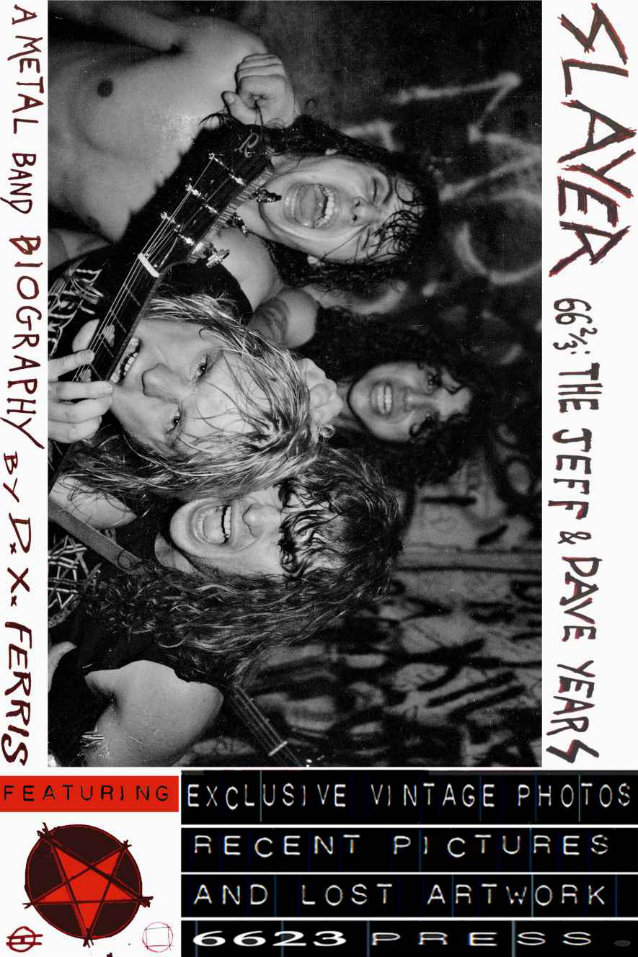