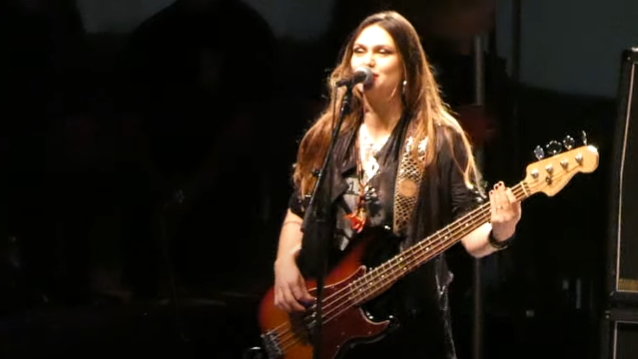 New VIXEN Bassist JULIA LAGE: 'It's An Honor For Me To Join' The Band

A week ago, longtime VIXEN bassist Share Ross announced that she was "taking a hiatus" from the band. Her replacement is Julia Lage, formerly of the Latin Grammy-nominated Brazilian rock group BARRA DE SAIA and wife of Richie Kotzen.

During an appearance last Friday (February 11),on SiriusXM's "Trunk Nation With Eddie Trunk", Julia spoke about how she ended up hooking up with VIXEN, saying: "Share is taking a hiatus. She wants to do her thing [and focus on her real estate career]. She's kicking ass. She's gonna be writing and playing forever — I mean, she's a badass artist and bass player, singer, everything, songwriter. So I got the invitation, and I'm, like, 'Yeah, of course I'm gonna join. Of course.'"

Asked how the other members of VIXEN reached out to her about joining the band, Julia said: "Well, actually, funnily enough, before [guitarist] Britt [Lightning, a.k.a. Brittany Denaro] joined VIXEN, me and her tried to put together a band, right when she moved to L.A. But that didn't work out, and then she joined VIXEN, and I was super happy for her. So, fast forward, she actually called me a few months ago and she told me about the scenario, and I was, like, 'Yeah. I would love [to do it]. I mean, it's an honor for me to join VIXEN.' So that happened. And that was it. It was that quick. And I was just, 'Okay. Sign me in. Where can I go?' [Laughs]"

Lage also reflected on her first performance with VIXEN, which took place on February 8 at the pre-Monsters Of Rock cruise concert at Magic City Casino in Miami, Florida. She said: "[Share played] a little more than half of the set, and then [before] the last three songs, she stopped [the show] and talked about [her plans] a little bit and told everybody what's gonna happen and introduced me. And then I stepped in and played the last three songs with them. And then actually she came back for the last song and sang along with us. It was just very nice. I thought it was very emotional too. It was a good way to transition."

The only remaining member of VIXEN's "classic" lineup is drummer Roxy Petrucci, who is also joined in the group by Lightning and singer Lorraine Lewis.

It was announced at the start of the pre-party that Vixen had a big surprise during their show.
I've been to thousands...