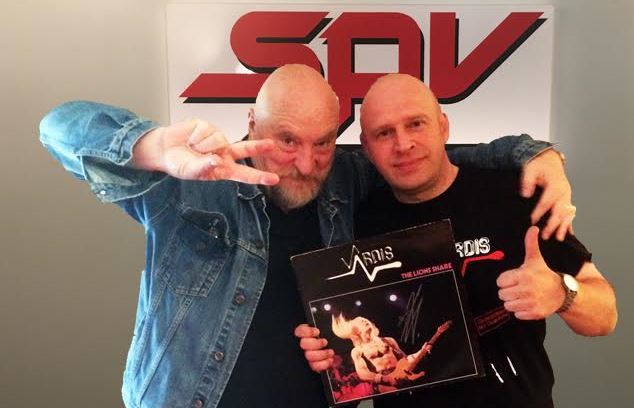 SPV/Steamhammer has announced the signing of one of the real and true veterans of the NWOBHM (New Wave Of British Heavy Metal): VARDIS. The band's new album, "Red Eye", will be released in 2016.

VARDIS was forged out of glam, punk, heavy metal, blues and rock 'n' roll in the crucible of 1970s northern England. They are a product of rock music across three generations: inspired by the great rockers and electric bluesmen of the '50s and '60s, learning their trade rubbing shoulders with the young guns of hard rock and punk in the '70s, and achieving prominence in the '80s as part of the New Wave Of British Heavy Metal. The hard, ferocious attack of their sound directly influenced the development of thrash and speed metal across North America and Europe, cited by metal giants such as METALLICA and MEGADETH. Never losing sight of the melodic, boogie sensibilities of their earliest influences, the VARDIS brand of hard rock retains a unique heavy groove, and has endured as truly original.

Guitarist and singer Steve Zodiac about the signing: "Reuniting after a 30-year hiatus was a leap in the dark, but the response has been tremendous. Terry, Joe and I have hit upon a creative chemistry that makes me as excited to be recording the 5th Vardis album today as I was cutting our first demos in '76.

"SPV/Steamhammer have a deserved reputation for high-quality releases, but it was their passion for the future of rock and metal as well its heritage that meant they were the label we wanted to work with. Together we can push boundaries on the most heartfelt, hard-edged VARDIS record yet, with that same rock and roll spirit at the centre of everything we do.!"

Olly Hahn, A&R at Steamhammer, adds: "I am a child of the New Wave Of British Heavy Metal and I remember well when I bought the 'Quo Vardis' album back then. The band combined certain styles like boogie, glam and hard rock and created their own musical brand. I'm very proud that Steve and the band decided to sign with SPV/Steamhammer. The band is on fire, and if you saw their gig at last year's Keep It True festival in Germany, you know what I mean!"