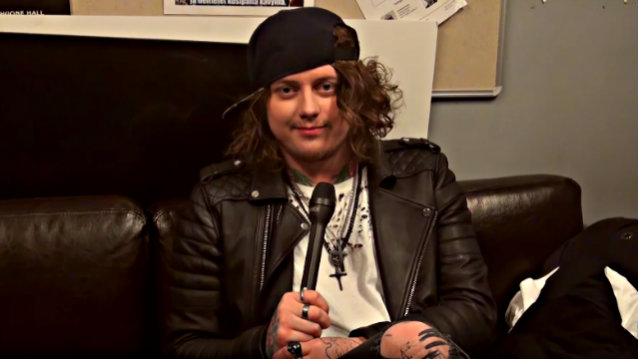 Next ASKING ALEXANDRIA Album Is Already Written, Ready To Be Recorded

Finland's Kaaos TV conducted an interview with ASKING ALEXANDRIA guitarist Ben Bruce before the band's March 20 concert at Pakkahuone in Tampere. You can now watch the chat below. A few excerpts follow (transcribed by BLABBERMOUTH.NET).

On when ASKING ALEXANDRIA made the decision to split with singer Denis Shaforostov and reunite with Danny Worsnop:

Ben: "I don't know that it was really decided. You know, it's not something that we sat down and thought about a lot. We were continuing on as ASKING ALEXANDRIA with Denis to keep the band going, and we had a great time. We wrote and recorded a great record together, and I have no regrets at all. But Danny is part of our family. He started the band with me and the other guys; we're the five original members. We went through a tough time, obviously, like a lot of relationships do. But I did say to Danny the day he called me and left the band the first time, I said, 'There'll always be a place for you in ASKING ALEXANDRIA,' because he started the band with us. And people forget everything that we went through to get to where we are. Everything happens for a reason… So, like I said, whilst we had fun, we had a great time with Denis, we toured, it was a good time, the album is great, I love 'The Black', it wasn't quite ASKING ALEXANDRIA. So none of us could be any happier than we are now. We're all stoked that Danny's back, and we're all having fun, and we're all happy. Danny's a lot healthier and doesn't really drink much anymore — same as me. And it's just been awesome. We're having a much better time. We get to actually mess around and enjoy other's company now instead of just being drunken idiots all the time."

On how Danny came to rejoin ASKING ALEXANDRIA:

Ben: "It's weird. Me and Danny just met up to hang out. We met up in L.A. I was over there doing movie stuff and he just so happened to be in L.A. at the same time. He was actually supposed to fly back the day I landed, but we found out that we could cross paths, so he changed his flight. And there was no plan or anything. We just hung out. We watched the movie that I started recently together, and we had such a good time and reconnected and everything just felt really good again. So when the situation arose that Denis no longer wanted to be in ASKING ALEXANDRIA, he just kind of disappeared. And I was, like, well, let's see if Danny would be interested again. We had such a good time the other night. We buried the hatchet, and it was like everything was great. I was, like, why not see how he feels? And I think he was excited by the idea too. Like I said, everything happens for a reason."

On the recently released clip of new ASKING ALEXANDRIA song and whether it represents the overall direction of the band's new material:

Ben: "We're holding our cards close to our chest right now. We're not gonna give too much away. Obviously, that was music that we had written. Whether it makes the album or not, we'll see. The whole album's written and is ready to be recorded properly. And then we have some huge touring opportunities in the works that we are working on right now, so it's gonna be exciting."

On whether the upcoming ASKING ALEXANDRIA album was written on the road:

The reunion between Danny and ASKING ALEXANDRIA was confirmed last October following weeks of rumors and speculation regarding the status of Shaforostov, who joined the band in 2015.

Bruce said in a video message that Shaforostov had "just stopped talking to us." But the singer later tweeted, "I left AA because I can't be in a touring band at this point in my life. There's no drama and I don't want to be a part of it."

For his part, Worsnop said about the reunion, "I'm now in a place mentally where this is something I can embrace again, with the men I started this crazy journey with."