NICK MENZA On Possible Return To MEGADETH: 'It'll Be Final When It's Final'

According to Examiner.com, ex-MEGADETH drummer Nick Menza has not denied that he has been in contact with his former bandmates about rejoining the group, further fueling rumors about the possibility of a reunion of MEGADETH's classic "Rust In Peace" lineup after guitarist Chris Broderick and drummer Shawn Drover unexpectedly quit the band late last year.

During an appearance at the Soultone Cymbals booth at this year's NAMM show in Anaheim, California, Menza replied that "it'll be final when it's final" when he was asked if there has been any communication between him and the MEGADETH camp about him returning to the band.

Pressed if he was going to rejoin MEGADETH as the replacement for Drover, Menza — who was photographed at the event talking to MEGADETH bassist David Ellefson (see below) — turned it around, asking, "What do you think are the chances of me coming back?"

Menza later addressed concerns by some fans that his return to MEGADETH would be complicated by the fact that he is involved in an as-yet-unnamed new "supergroup" with fellow ex-MEGADETH members Chris Poland (guitar) and James Lomenzo (bass). Menza said: "I'm a free agent. I can do whatever I want."

Menza has previously said that his return to MEGADETH is down to the band's mainman, Dave Mustaine. "Like I have said in the past, I don't rule out rejoining MEGADETH and the opportunity would be totally cool," Menza wrote in a December 2014 online posting. "I'm open to whatever could possibly happen. That's up to Dave."

Following the reissue of the entire MEGADETH catalog, Menza was invited to reunite with the band in 2004. Days after a reunion was announced, Menza was fired after rehearsals and replaced with Shawn Drover. Dave Mustaine said that this was because Nick "just wasn't prepared."

Only hours after Drover announced his exit from MEGADETH on November 25, 2014 to "to pursue [his] own musical interests," guitarist Chris Broderick revealed he also quit the legendary metal band, saying that he was leaving the group "due to artistic and musical differences."

Former MEGADETH guitarist Marty Friedman, who was also part of the band's "Rust In Peace" lineup, recently said that he "would not be against considering" a possible return to the band as the replacement for Broderick, but cautioned that fans shouldn't "get [their] hopes up either." He explained: "I've never really said 'never' to anything like that. But just because there's a vacancy in the band, that's certainly no reason for me to be interested in it." 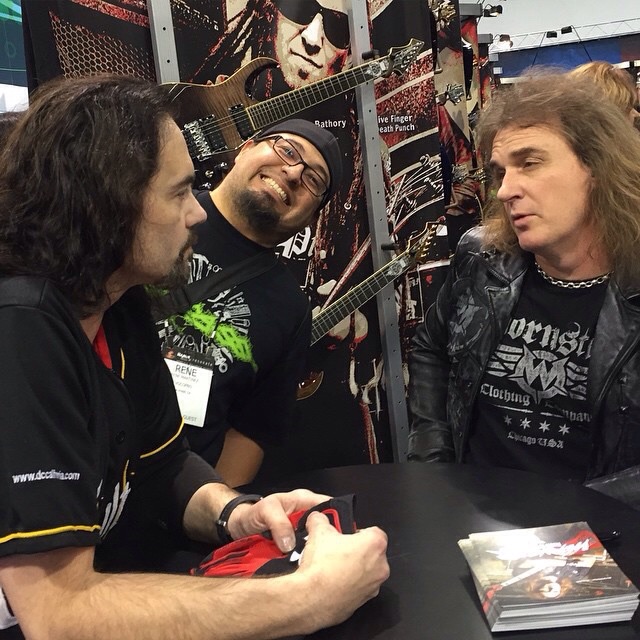