Rock Fest is back for its 22nd year with a killer lineup including some of the biggest names in rock. NICKELBACK, AVENGED SEVENFOLD, JUDAS PRIEST and SHINEDOWN are slated to headline the event in Cadott, Wisconsin July 16-19. The 50-plus-band bill, over half making their inaugural trip to Rock Fest, also features performances from BREAKING BENJAMIN, BUSH, CHEVELLE, POP EVIL, BLACK STONE CHERRY, ALL THAT REMAINS, HINDER, JACKYL, NOTHING MORE, ADELITAS WAY, STARSET, SHAMAN’S HARVEST, KYNG, NEW MEDICINE and many more.

Organizers of the rock and camping festival say this year celebrates the complete rock experience with icons of rock like JUDAS PRIEST and the hottest and most current rock bands like NICKELBACK and AVENGED SEVENFOLD. Rock Fest has also added a new Tribute Stage, catering to fan favorites AC/DC, METALLICA, OZZY OSBOURNE and GUNS N' ROSES.

Gates open for Rock Fest on Thursday, July 16. Rock fans are able to camp onsite in one of the 7,000 campsites surrounding the Concert Grounds. Daily shuttles provide transport to and from nearby hotels. Rock Fest offers VIP and reserved tickets and camping for the festival, currently on sale at Rock-Fest.com. Fans have the opportunity to get Pit Passes for each show, getting them as close as they can to their favorite bands.

Presale tickets sold out in hours for the 2015 festival. Early-bird tickets, camping and Morrie's pit passes go on sale March 10 at 8 a.m. CST. New for this year are payment plans, RFID wristbands and the option to go cashless at the event for the first time.

AEROSMITH performed at Rock Fest in 2013, and the 2012 lineup featured IRON MAIDEN. 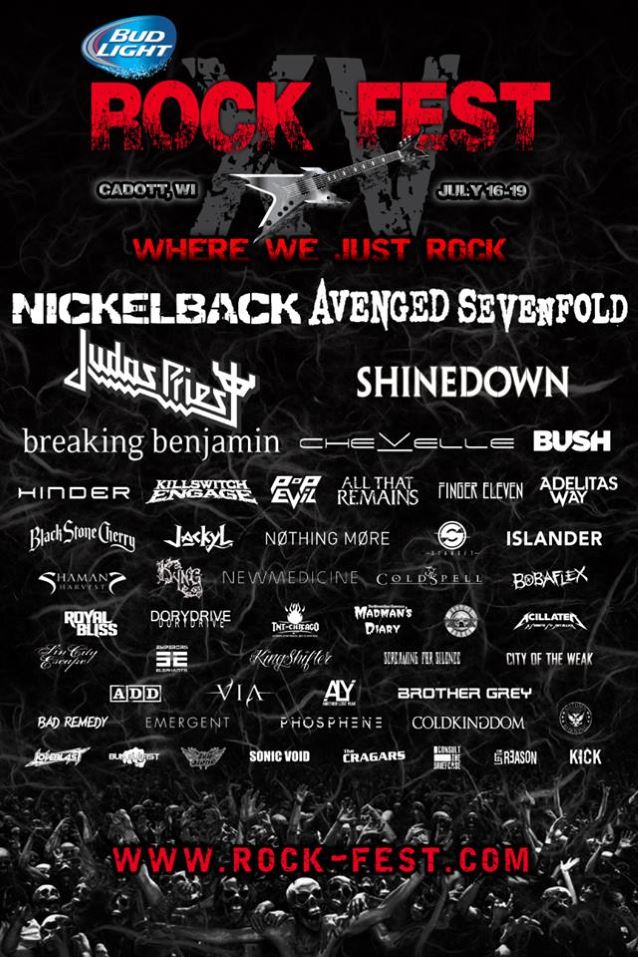