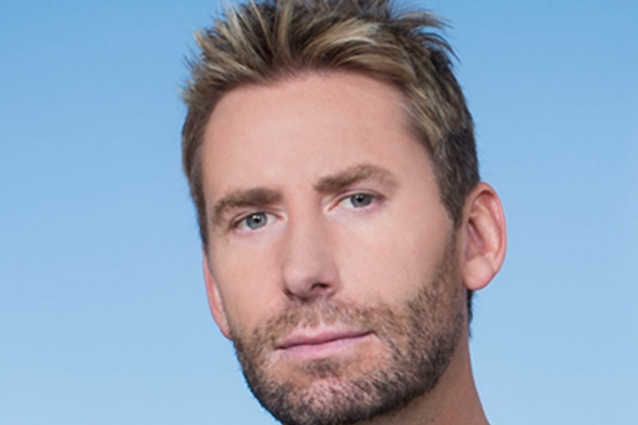 NICKELBACK's CHAD KROEGER: DEVIN TOWNSEND Is 'The Most Wonderful Human Being Ever'

Chad Kroeger says that Devin Townsend is "the most wonderful human being ever."

During an interview with the TODDCast Podcast", Kroeger spoke in more detail about how he ended up befriending Devin and guesting on his new LP, which arrived in March via InsideOut Music.

According to Chad, he reached out to Devin after the STRAPPING YOUNG LAD mastermind took to his Twitter and "commented on the guitar riff of 'Feed The Machine' and said, 'Hey, I really like this new NICKELBACK riff,' or something like that. And the crazy thing was, out of the blue — absolutely out of nowhere — the day before he did that, I watched him doing a guitar clinic in a guitar store somewhere," Kroeger recalled. "I don't know where it was, and there was all these shredders sitting around wanting him to [do] arpeggio sweeping and tapping on all six strings at the same time kind of thing. And he didn't really do that. He spoke a lot about his head space and where he was and the way he used to think and the way he thinks now, and it was far more interesting than watching someone go, 'Watch how fast I can play.' And it was endearing. I just immediately had a connection with him. I was, like, 'I'd really like to get to know this guy.' The next day, he said something on social media about how he liked that riff.

"And the funny thing was — and we both laugh about this now — he said, 'Well, I heard you didn't like my band and that you were talking shit back in the day,'" Chad continued. "And I was, like, 'Well, that's not true.' And I said, 'I actually heard that you didn't like my band and you were talking shit back in the day.' And he was, like, 'Well, that's true.' [Laughs] 'Yeah, 'cause I thought I wasn't supposed to like NICKELBACK. I was like everyone else, 'There's this radio band,' and blah blah blah.' Anyway, so I got his phone number from Scott Cook, our engineer, because Scott's worked on tons of Devin's records. And I texted him. I just said, 'Hey, this is Chad. I just wanna let you know, I think that's really cool what you said,' and on and on and on. And the next text that he sent me was — it looked like a 10-page e-mail. And he just spilled his guts on all these things in one text. And he was, like, 'I've gotta let you know, I feel bad for anything I may have said back in the day.' And he shouldn't have said it, 'cause I didn't hear anything [laughs], to be honest with you. But he was so nice and so genuine. And he's such a wonderful human."

Kroeger added: "It must be insanely therapeutic for him to get up on stage and scream and belt the way that he does and get all of that out of him, because there isn't one ounce of that anger or aggression that actually lives inside of him. He's the most wonderful human being ever. He's just lovely. And he's so smart and so funny and fast — he's really witty. And I just love that about him. I don't think he can tell a lie. If you just ask him anything, he'll just give you the honest-to-God truth about anything in his life. And it's just so refreshing; it really is."

Asked what the chances are of an actual musical collaboration between him and Devin becoming a reality, Chad said: "I don't know what I would bring to the table. He'd have to slow down a lot. [Laughs] He would be screaming and I would be harmonizing — to the best of my abilities. I have no idea what any version of that would sound like. But I'd be down. We just have to give it a try."

Earlier this year, Devinsaid that he owed Chad "a real debt of gratitude" for convincing him to not make a "sell-out" album, but rather the type of progressive, schizophrenic record Townsend has made a career out of.

NICKELBACK is continuing to tour in support of its latest album, "Feed The Machine", which was released in June 2017 via BMG.