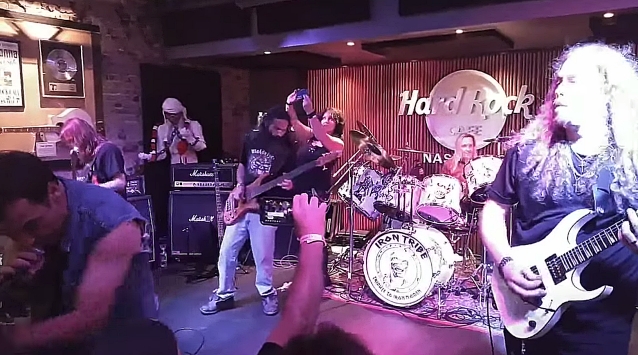 Nicko McBrain joined the Tennessee IRON MAIDEN tribute band IRON TRIBE on August 18 at the Hard Rock Cafe in Nashville to perform two MAIDEN classics: "Run To The Hills" and "Flight Of Icarus". Video footage of his appearance can be seen below. MAIDEN bassist Steve Harris and guitarist Adrian Smith were also in attendance at the show — which took place one day before MAIDEN's concert at Nashville's Bridgestone Arena — but didn't get up on stage to play with IRON TRIBE.

IRON TRIBE said in a Facebook post: "We had an epic night playing the 'Night Before Maiden' show at Hard Rock Cafe Nashville on Aug 18, 2019. Special guests in attendance included Steve Harris of IRON MAIDEN, Nicko McBrain of IRON MAIDEN, Adrian Smith of IRON MAIDEN and Richie Faulkner from JUDAS PRIEST. AND Nicko McBrain got up and played some songs with IRON TRIBE! What an epic night. We are honored that IRON MAIDEN came to our show beyond words. Steve Harris stayed for our entire show. Thank you to everybody who came out. We exceeded capacity at the Hard Rock with 390 people in attendance. I hope all of you that were waiting to get in got to come in eventually. We love you all and you all ROCK! You shared our greatest night as a band with us."

McBrain recently said about the trek: "When you're there in the flesh and you see this incredible stage set and the production we put into this show, you're going to be absolutely astounded."