Finland-based symphonic metallers NIGHTWISH have announced their 26-date headlining tour of North America for 2016, launching in Sayreville, New Jersey on February 19, hitting six Canadian cities plus Pittsburgh, Anaheim, and New Orleans, then closing out in Tampa, Florida on March 23. Opening for the tour will be Dutch symphonic metallers DELAIN.

Checking in from the first leg of the North American tour, NIGHTWISH shared the following about the second leg of the tour in 2016: "The first one was so brilliant that we just gotta come back!"

Advance tickets for the confirmed tour dates are now on sale exclusively at EnterTheVault.com. A limited number of VIP meet-and-greet tickets (which include a poster signed by the band and a tour program) are available for each show for purchase. Tickets will go on sale June 6 at all other outlets.

NIGHTWISH has just released a new single, the title track of the band's latest album, "Endless Forms Most Beautiful", as a limited-edition MCD, 10-inch vinyl and as a download.

As previously reported, the NIGHTWISH show in Vancouver, British Columbia on April 25 at The Orpheum was filmed for a future DVD release.

NIGHTWISH is currently on the road in North America with special guests SABATON, a Swedish heavy metal band that gives us a history lesson in their songs on war and historical battles, and Dutch female-fronted metallers DELAIN.

"Endless Forms Most Beautiful" was made available on March 27 in Europe and March 31 in the U.S. via Nuclear Blast. 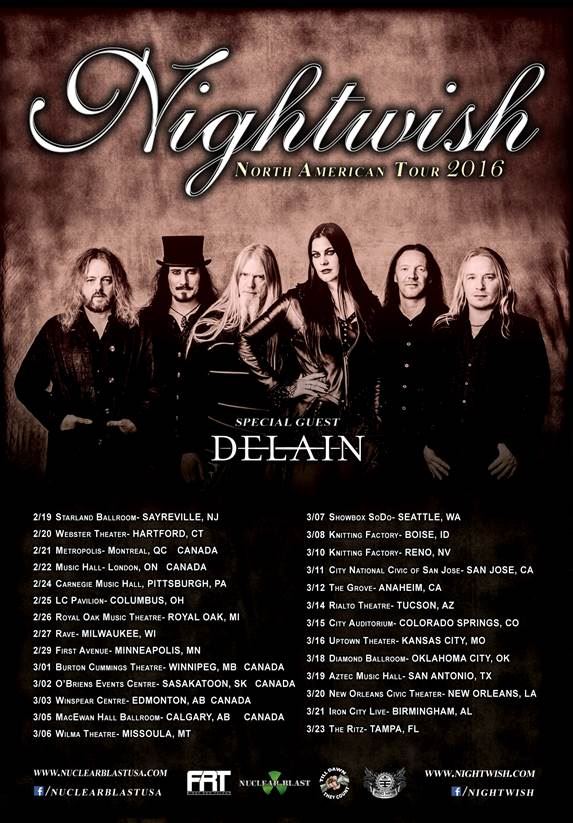