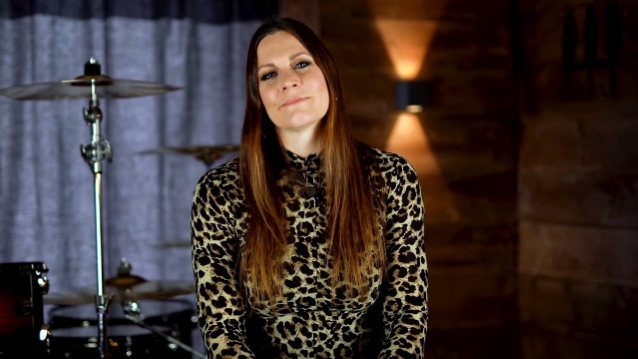 NIGHTWISH's Floor Jansen has undergone surgery to have a tumor removed after recently being diagnosed with breast cancer.

Earlier today, the 41-year-old Dutch-born singer shared the following update via her social media: "The tumor removal surgery went well without any surprises. I'm recovering well and should be up and about soon. It will take a few weeks to know what the findings are regarding the tumor and lymph node that will be tested.

"I want to use this opportunity to thank the medical staff that took care of me. All done with so much care, empathy, and professionalism! I felt completely safe in your capable hands! You all are troopers, and not just in the hospital I went to, but worldwide. Thank you!!"

Jansen revealed her diagnosis two days ago. At the time, she wrote: "A letter to you, Life comes in waves, with ups and downs. I have had the joy of riding many highs, and I have shared these with you through social media and the many many shows worldwide throughout the many years of my career.

The tumor removal surgery went well without any surprises. I’m recovering well and should be up and about soon. It will take a few weeks to know what the findings are regarding the tumor and lymph node that will be tested.

I want to use this opportunity to thank the medical staff that took care of me. All done with so much care, empathy, and professionalism! I felt completely safe in your capable hands! You all are troopers, and not just in the hospital I went to, but worldwide. Thank you!!