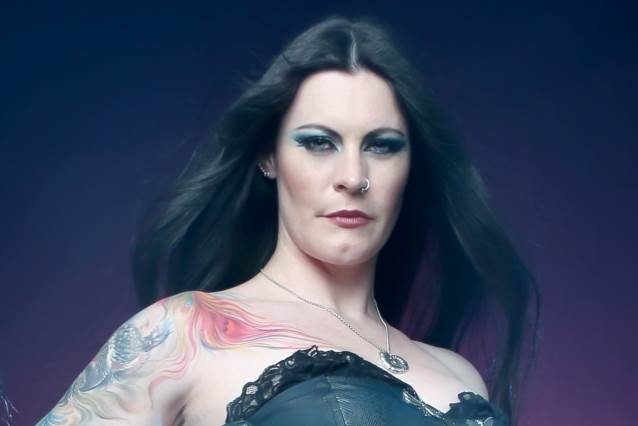 NIGHTWISH Vocalist FLOOR JANSEN On Choosing Setlist For 'Decades' Tour: 'You Can Never Please Everybody; It's Impossible'

NIGHTWISH vocalist Floor Jansen participated in a question-and-answer session prior to the band's appearance at this year's FortaRock festival, which was held last month at Goffertpark in Nijmegen, the Netherlands. Video footage can be seen below. A few excerpts follow (as transcribed by BLABBERMOUTH.NET).

On choosing the setlist for the group's current tour in support of their recently released "Decades" compilation:

Floor: "That was an interesting choice for this tour in particular because we're celebrating our 20-year anniversary by making a compilation of all our work, and so for the live set comes the same choice. It's really, really difficult, because there are so many albums and there are so many songs, but we want to give an overview of everything, from the first to the last album. You can never please everybody; it's impossible."

On what it meant to her to perform live in her home country at FortaRock:

Floor: "[I'm] Dutch forever, even though I moved abroad and sing in a Finnish band. My roots are, of course, here, and I started here playing in basements and tiny, little places. I've had the support of the Dutch audience behind me all the way, and apparently still do. It's really, really heartwarming."

On moving to Scandinavia:

Floor: "I never really thought of myself as somebody to move abroad. It just came on my path. I tried to learn the Finnish language, which is really, really, really hard, and I realized that if I want to really learn it, I need to move to Finland. That's a huge step. It's very scary. I did it alone as well. I'm surrounded by great people, but still, there you go... I didn't get anything. If there was a translation into another language, it was in Russian. Go to the supermarket, looking at the signs, like, I have no idea. Then I met a Swedish man and talked English with a Swedish man in my home in Finland, which soon made no sense, but I fell in love with the North, so it became Sweden. My Finnish, it never really happened, but I'm good in Swedish."

On whether she plans to revisit REVAMP, the band she fronted when NIGHTWISH hired her:

Floor: "I did at first, so when I joined NIGHTWISH in that sudden way, we'd just planned the recording of the second [REVAMP] album after a break — well, me being sick and getting everything back on the road, planning stuff and getting a new album ready, that is when I joined NIGHTWISH all of a sudden. That meant that I had to adapt the studio planning and release of the second album, but I didn't say, 'Oh, well now I'm not going to release the CD,' or, 'I'm never finishing it.' I wanted to finish it; I wanted to tour with that for the people that had been waiting, both in my band [as well] as the people listening to it. So that's what I did, but that meant that I was on tour and making albums all the time, and since I already had a burnout, I did not want to get another one. I had to make a choice, also because I would have to ask from everybody in REVAMP to keep waiting for me, and that's not fair."

On whether she has musical ambitions beyond NIGHTWISH:

Floor: "I don't have particular wishes at the moment, because I'm very satisfied in what I can do musically and also with my creative energy. Even though I'm not writing, I'm getting a lot of freedom to make the songs come alive with my creative energy and my sound, and in that, I feel very challenged. But I've always been doing side projects or something else, and I've actually been working on an album [editor's note: referring to NORTHWARD, her project with PAGAN'S MIND guitarist Jørn Viggo Lofstad] that I wrote ten years ago, that will come out this year in October. That's rock, and me experimenting with that. Sometimes, I would love to record a super-quiet album, but for some reason, I never really got to that because my heart lies with the heavy stuff."

NIGHTWISH keyboardist and main songwriter Tuomas Holopainen said in a June 2018 interview that he had "70 [or] 80 percent of the material written" for the band's next album. He added: "The idea is next summer, in June of 2019, we're going to go to the rehearsal camp once again, start working with the album, record it, and, if everything goes as scheduled, we're looking at a 2020 springtime release, followed by a massive tour, of course."