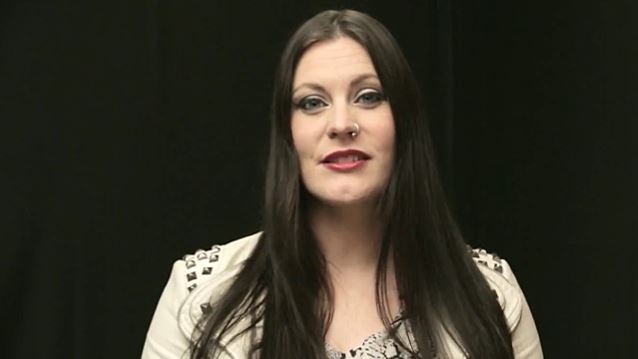 Metal Nation Radio host and Metal Wani editor in chief Owais "Vitek" Nabi recently conducted an interview with NIGHTWISH singer Floor Jansen. You can now listen to the chat in the YouTube clip below.

Asked for her opinion about bands like NIGHTWISH being lumped in the "female-fronted symphonic metal" category, Floor said: "Now there is already 'symphonic metal' behind it, so it narrows it down… It says a little more about what the music actually does."

Jansen added: "It's not so surprising that there are more women in metal bands. And they're not just fronting them. There are drummers and guitar players, bass players… So… I would say, get over it and just call it 'symphonic metal.' It doesn't really [matter] who is singing."

In a fall 2014 interview with CrypticRock.com, vocalist Alissa White-Gluz of Swedish / Canadian / American metallers ARCH ENEMY echoed Jansen's sentiments regarding females in metal. She said: "I agree that it's absurd to call a category of music 'female-fronted metal,' because if you look at OTEP or EPICA or ARCH ENEMY, we don't sound anything alike. Or LACUNA COIL or HUNTRESS or any other band you wanna put in there. It's all different kinds of metal. Just because the gender of the vocalist is the same, that doesn't actually tell you anything about the sound of the band."

She continued: "But, yeah, I think it's a blessing and a curse, in a way, because there are some fans out there that, as soon as they see a female in a band, they're automatically supporting the band and they're happy to do it. And that's cool if that's what they like. I think it's a little weird, because sometimes maybe those bands really aren't as great as another band that has a male singer and won't get as much attention. But that being said, there's also the other side of the coin, which is that there's some people that just won't accept the band if there's a woman in the band. So there's a positive and a negative to being a girl in a boy's club. But I don't even think about it anymore, to be honest. 'Cause I've been doing it quite some time now. Probably when I was first starting out and didn't have as much of an established persona or whatever, I faced a lot more of the novelty-type attitude, like people just, like, 'Hey, you're hot,' or whatever. But now nobody even talks to me. [Laughs]"

NIGHTWISH's new album, "Endless Forms Most Beautiful", was made available on March 27 in Europe and March 31 in the U.S. via Nuclear Blast.

Jansen, who officially joined the band in 2013, made her live debut as the frontwoman of NIGHTWISH on October 1, 2012 at Showbox Sodo in Seattle, Washington.