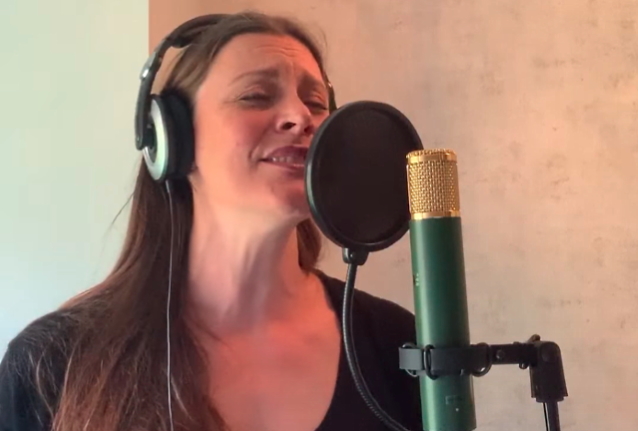 NIGHTWISH singer Floor Jansen has shared a "studio video" for her recently released Dutch-language song called "De Beelden Blijven". An English version of the track, which was recorded for the documentary "Kinderen In Oorlog: 75 Jaar Later" in cooperation with War Child, will be made available at a later date.

Jansen spoke about her contribution to the track during a live video chat with fans on Friday (May 15). She said: "That was a huge honor, and I cannot start to tell you how amazing I thought it was to see all the reactions. I think now it's 25 languages the lyrics got translated in. It's fantastic to see everybody worldwide so engaged and so touched by the song.

"War, unfortunately, is a worldwide phenomenon, but it's music that does the wordless talking sometimes," she continued. "And even though it's cool to see it in your own language, I think one of the first reactions that I saw was that a lot of people felt it before they actually knew what it really meant. And to know the words, of course, if amplifies the actual meaning, but it was wonderful to see the initial reactions. It came in so strong. That was the intention, of course."

Jansen went on to say that she is "very grateful" to have been asked to sing on the song. She added: "It's War Child doing all the helping, and trying to help, in this case, children to cope with the effects of war and make sure that, or try at least to make it so that it's not a sentence for life mentally, which is quite a challenge that I can only imagine."

NIGHTWISH's ninth studio album, "Human. :II: Nature." , was released on April 10 via Nuclear Blast. The long-awaited follow-up to 2015's "Endless Forms Most Beautiful" is a double album containing nine tracks on the main CD and one long track, divided into eight chapters on CD 2.