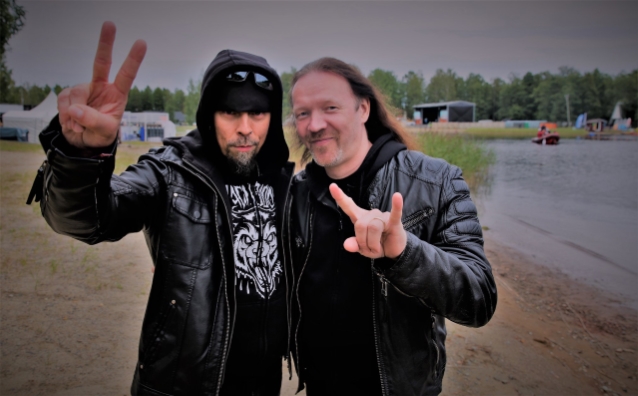 Longtime NIGHTWISH drummer Jukka Nevalainen, who stepped away from the band's touring and recording activities five years ago, has confirmed his permanent exit from the group. His replacement will be Kai Hahto, who has been playing with NIGHTWISH since the summer of 2014.

Nevalainen explained in a statement: "It has now been five years since my difficult decision, due to severe insomnia, to step aside from the Vehicle of Spirit of NIGHTWISH. This included the previous studio album and the tours which followed.

"As I then expected, it turned out to be the right thing to do. These days I'm doing fantastic, and hardly ever need to deal with any sleeping issues. It also dawned on me that having more time to merely focus on band-related things happening behind the curtains made all the difference.

"Having said this, I have decided not to push my luck by returning to the band. My dear pal Kai Hahto will take my place as a full-time member of the band. I will continue to take care of the band's businesses in the background, and I'm very much looking forward to what other adventures life has to offer!

"My sincere thank yous for the band and the fans for the glorious time we shared!"

NIGHTWISH has begun working on its ninth studio album, to be released in the spring of 2020. Keyboardist and main songwriter Tuomas Holopainen recently said that "all the songs" for the follow-up to 2015's "Endless Forms Most Beautiful" album have been completed musically. "The arrangement process, the rehearsals are gonna take months — it's gonna take all of [2019], actually," he said. "But all the songs that are gonna be included on the album, with the titles, with the album title, everything's now there. So from now on, it's just the arranging and the polishing the corners."

NIGHTWISH spent most of 2018 on the road in support of its "Decades" compilation.