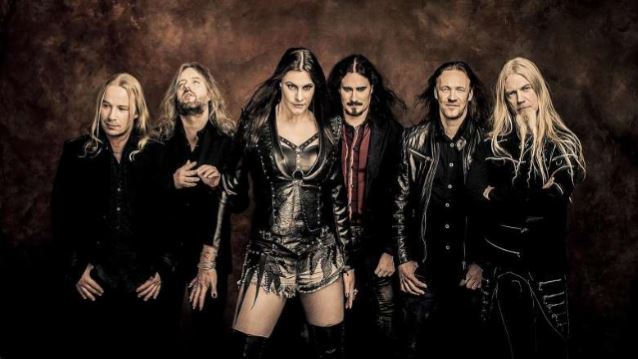 Australia's national synchronized swimming team has announced that it will use the NIGHTWISH song "Last Ride Of The Day" off the band's 2012 album "Imaginaerum" for their competition at the Rio 2016 Olympics. The track will be played in an orchestral version during the team's performance in Rio de Janeiro.

According to NIGHTWISH's record label, Nuclear Blast, the band feels very honored and wishes luck to the entire team.

NIGHTWISH recently announced that it will take a year-long break in 2017 following the completion of the touring activities for the group's latest album, 2015's "Endless Forms Most Beautiful". NIGHTWISH keyboardist and main songwriter Tuomas Holopainen told Finland's Kaaos TV: "It's a peculiar feeling, because throughout the twenty years [of NIGHTWISH's existence], I've never felt like this, that you really, really need to step away for a while. And it's not really fatigue — it's not like we're burning out or anything — it's just the inspiration or the passion of starting to do a new album, it's just not there. And we are fortunate enough to be in a position that we can actually take a year off, and that's a huge privilege for us. So we're just taking advantage of that."

An unofficial 20th-anniversary show will be held on August 20 at Himos Park in Jämsä, Finland.

NIGHTWISH is putting the finishing touches on a new concert DVD, to be released before the end of the year.

NIGHTWISH released a strictly limited special tour edition of "Endless Forms Most Beautiful". The tour edition came with a bonus DVD of live performances, documentary footage and promo videos as well as a huge photo gallery.