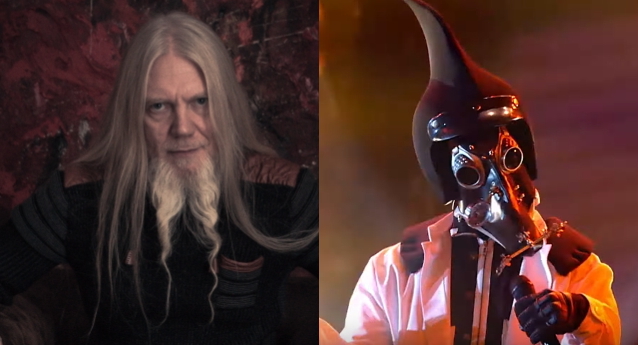 NIGHTWISH bassist/vocalist Marco Hietala (a.k.a. Marko Hietala) has been crowned the winner of the fall 2020 season of "Masked Singer Suomi" — the Finnish edition of the popular masked singing contest. He was disguised as Tohtori — the Doctor.

Based on an international hit, "The Masked Singer" features celebrities facing off against one another with one major twist: each singer is shrouded from head to toe in an elaborate costume, complete with full face mask to conceal his or her identity.

Marco's solo album, "Pyre Of The Black Heart", came out in January via Nuclear Blast. The style of the effort, which was issued in Finland last May 2019 under the title "Mustan Sydämen Rovio", has been described by Hietala as "hard prog."

Earlier this year, Marco told Subculture Media about his influences: "Oh, man, I listen to so much music. Since my youth, I have been a metal guy, but I also listen to a lot of other stuff. Ever since I was a kid, I've listened to jazz, Irish folk songs, classic, Elvis [Presley], THE BEATLES… whatever. My father had a very big vinyl collection; he was an enthusiast. He also played guitar and sang so that is where a lot of the versatility comes from."

Regarding how he came to join NIGHTWISH nearly two decades ago, Marco told Ultimate Guitar: "I knew about the band, because I had been playing in different groups before that. When the guys were starting out, they actually opened for one that I was playing with. I think that was in 1998; it's a kind of band that I'm still with, it's called TAROT. Then I was also playing bass in the band called SINERGY, and we did five weeks of touring with NIGHTWISH in central Europe; we were warming up for NIGHTWISH at that time, and that was actually in 2000, which is where I kind of really became aware that this thing is big and they got their sound together and everything. And, in a way, I was familiar already, got to know the guys and talking with Tuomas [Holopainen, NIGHTWISH keyboardist] was pretty much easy, because, well, we kind of find out that we like the same books and movies and stuff. But the guys called me in 2001 and [asked me if I] would be interested to play the bass for the band. I was, like, 'Hey, all right. I'll come over and let's talk about this thing and see what happens.' And we just kind of agreed that, 'Okay, let's give it like two weeks for thinking time,' but I was pretty sure by the same thing that, 'Okay, I'm gonna do it.' And by the time we got into rehearsals, I was living in Helsinki at the time, and I went to the train station and guys were there to pick me up from the train station. And we just immediately got to the gas station and bought loads of beer and went to the rehearsal room and started drinking and playing, and it clicked."