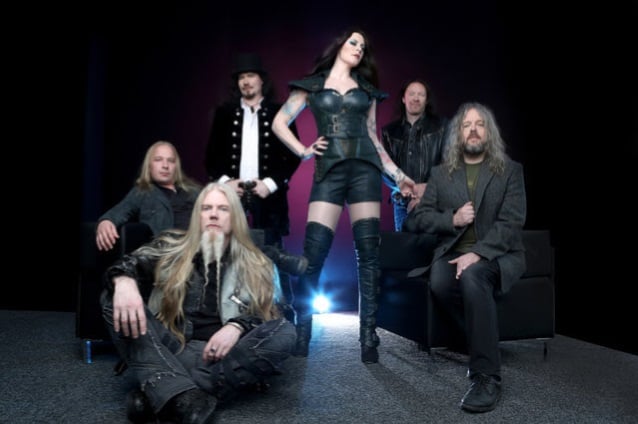 Tuomas Holopainen says that he has written six new songs for NIGHTWISH's next studio album, marking the first material he has composed for the band in four years.

After NIGHTWISH completed a world tour in support of its latest album, 2015's "Endless Forms Most Beautiful", the band announced that it would take 2017 off to focus on family life and other projects. NIGHTWISH has since revealed its next project: a nine-month-long "Decades: World Tour 2018" starting in March with 34 shows in North America, featuring a very special setlist, consisting of rarely heard material from the group's earlier era.

Earlier this month, Holopainen made an appearance on Finland's Radio Rock to promote the debut album from his AURI project. Speaking about how working on the record — which sees him teamed up with his wife, popular Finnish singer Johanna Kurkela, and English composer and multi-instrumentalist Troy Donockley (also of NIGHTWISH) — reignited his passion for songwriting and music, the keyboardist said: "I don't wanna sound like a suffering artist or any of that cliché nonsense. It's a thing I can't really explain, but since we got the previous NIGHTWISH album, 'Endless Forms Most Beautiful', finished, I just didn't feel like doing music, doing NIGHTWISH. Even I didn't listen to music that much, so something was gone. And I think it has to do with the fact that we were really content with the previous album, the last song, 'The Greatest Show On Earth'. It was, like, 'Yeah, this is it. Or is this it?' And for about a year and a half, I didn't feel like doing music, especially for NIGHTWISH. But then, when we got the AURI album finished last September, I decided to give NIGHTWISH songwriting another shot, and then all heavens broke loose. [Laughs] So that means, [for] about four months [now], I've been just immersed with NIGHTWISH again, and I feel really happy and excited and inspired about it, because it's been lost for such a long time. So I have six songs done now, and there's gonna be a lot more to come. But this year is gonna be spent touring with the 'Decades', and there's only so much you can do, songwriting-wise, while you're on tour. So it's gonna take the bigger part of 2019 to get the songs done, and then rehearse them, go to the studio. So 2020, maybe, the next album — it's not gonna happen before that. But things are looking really good, at least inside of my own head."

In 2016, Jansen shot down speculation that NIGHTWISH's decision to take a year-long break had something to do with tension between members of the group.

AURI will release its self-titled debut album on March 23 via Nuclear Blast.