This year marks the tenth anniversary of the release of Nikki Sixx's drug-soaked New York Times best-selling memoir, "The Heroin Diaries". Chronicling the year of decadence and depravity that almost cost Sixx his life during the recording and tour for MÖTLEY CRÜE's seminal 1987 album "Girls Girls Girls", the book not only became a worldwide bestseller but also spawned the band SIXX:A.M., Sixx's nationally syndicated daily iHeart Media rock radio show "Sixx Sense With Nikki Sixx" and soon, tenth-anniversary editions of "The Heroin Diaries" book and SIXX:A.M.'s soundtrack by the same name (to be announced next month and coming out this fall),as well as the forthcoming "The Heroin Diaries" play, among many other ventures.

Now, Nikki Sixx and Heavy Metal are proud to announce a graphic novel adaptation of this powerful book that gives both insight and understanding to the deadly trap and temptation of addiction. "The Heroin Diaries" graphic novel will be the first release under Heavy Metal's new 12 X 12 imprint, a new line of music-themed art books and graphic novels that will explore the songs and experiences of the most exciting musical artists. Fans visiting Comic-Con San Diego can get an exclusive first preview of the interior pages when visiting the Heavy Metal booth #1529 at the convention between today and Sunday, July 23.

Jeff Krelitz, CEO of Heavy Metal, said: "I've been the biggest fan of MÖTLEY CRÜE since the release of 'Too Fast for Love', and have nothing but the greatest respect for Nikki and his songwriting, so for us to be able to collaborate with him on bringing this tragedy-to-triumph to a new audience in a powerful way is a dream come true."

Says Nikki: "'The Heroin Diaries' has always been deeply personal to me. So when the idea came up for a graphic novel based on the story, who better to partner with than the iconic Heavy Metal brand? I grew up reading their magazine as a kid. This is really a passion project and I've been intimately involved in every step along the way, from the storyline to the look and feel of the art. Working with Jeff, Rantz and their team has been an inspiring experience and I think we came up with a really unique spin on 'The Heroin Diaries' that tells the story from a different angle. It is meant to be a treat for fans of 'The Heroin Diaries', old and new, and I hope everyone will enjoy the graphic novel as much as I enjoyed putting it together for you."

Working in close collaboration with Sixx, "The Heroin Diaries" is being adapted by Rantz Hoseley, known for his award-winning work with Tori Amos on the graphic novel "Comic Book Tattoo", along with acclaimed artists Danijel Zezelj, Andy Kuhn and Kieron Dwyer. Hoseley summed up the development experience by saying: "Getting to work with Nikki and his team at 10th Street Entertainment to bring this story to life in a new way has been incredible. It's been a fantastic collaboration focused on the sole goal that when the fans pick it up, it blows their hair back like a power chord through a stack of Marshalls."

The 150-page graphic novel will be presented in a 12"x12" prestige "album" format and come in different collector's editions, details of which will be revealed in the near future. Those interested should sign up now at Pledge Music to guarantee the opportunity to purchase a copy, receive an exclusive 10% discount on their order when the graphic novel becomes available for purchase next month and also, to get exclusive news about the the forthcoming tenth-anniversary editions of the book and soundtrack first. 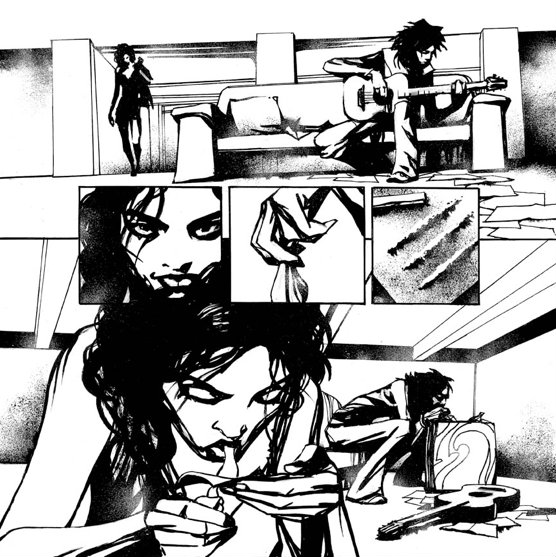