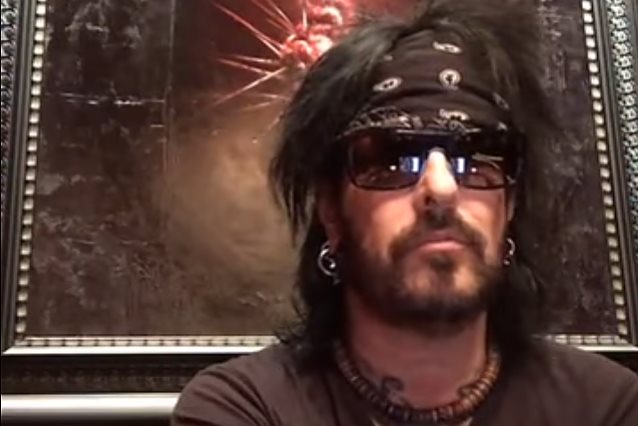 MÖTLEY CRÜE and SIXX:A.M. bassist Nikki Sixx says that he "can't wait" until Donald Trump is out of the White House, explaining that he doesn't believe the real estate mogul is "the right choice" to lead the United States.

Sixx's latest comments came as he was discussing the inspiration for the SIXX:A.M. track "Rise" during a February 1 Facebook Live chat from his home.

The rocker said (see video below): "That song was inspired by the environment of the presidential campaign and what was going on in the world, and we were just saying, 'We need to rise up. We can be better than this.'"

He continued: "You know, it's a volatile time right now. And I have to say, I didn't vote for Donald Trump; I don't believe that he's the right choice for our country. But I'm an American, and I hope he does a great, great job. And what I do love is that in 2017, people are demonstrating and speaking out and having big conversations. And that is what's happened in the '60s and the '70s, and it creates great music and great art, and great conversations lead to something."

SIXX:A.M. singer James Michael told BBC News prior to the election that 2016 was "one of the loudest, most volatile election years I can remember." He explained: "There's a reason for that. There's a reason people like Donald Trump are getting so much traction. Because he's just saying things very loudly, very boldly. He's not being politically correct. And the reason people are reacting to that type of a voice is they're angry. They're scared on a global level and a personal level. It affects them right down to the dinner table."

Sixx added: "You have a lot of people rallying behind that campaign, who are clearly fed up, and clearly engaged and activated. But when you really look at the policies being offered to those people, they don't sync up.

"A lot of people who say 'I like Donald Trump because he speaks his mind,' are following someone who's not really going to act in their best interests. That's what we're reacting to."

He continued: "We are under siege. Politics has become reality television. It is ridiculous.

"We have presidential candidates not being presidential at all, saying the most ludicrous stuff and the media regurgitates it, over and over. It is nothing to be proud about. So how can people not stand up and say 'this is BS'?"