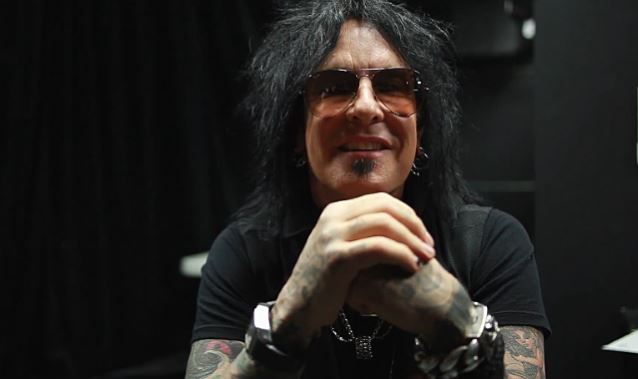 MÖTLEY CRÜE's "The Final Tour", which kicked off last year, will end New Year's Eve at the Staples Center in Los Angeles after one more round of North American gigs.

Speaking to The Billings Outpost, MÖTLEY CRÜE bassist Nikki Sixx admitted that he and his bandmates are going into their final run of shows with a renewed appreciation for each other.

"This is just probably a bad analogy, but if you've been in love with somebody for over 30 years, there are days when you may take them for granted, days when they may get on your nerves," Sixx said. "There are days when you're, like, 'I don't know if I love them as much as I used to love them.' Then you find out they're going to die. And, all of a sudden, all of the little things about them become so important, and all the laughter and all that seems to get louder and you start to remember things in a positive way. I think that's how it is for me and the guys. We're, like, 'Wow, this is real… It's getting fucking real."

According to Sixx, he hasn't had any second thoughts about ending MÖTLEY CRÜE. "No, absolutely not, not one second thought, never," he said. "This is on MÖTLEY CRÜE's terms. We decided to go out the way we came in, and we're not really interested in any other version of it. There are all kinds of stuff that are around here and there. I don't know, maybe we'll make some music. Maybe we won't. But right now, as far as that specific question, no to us ever getting back together and touring."