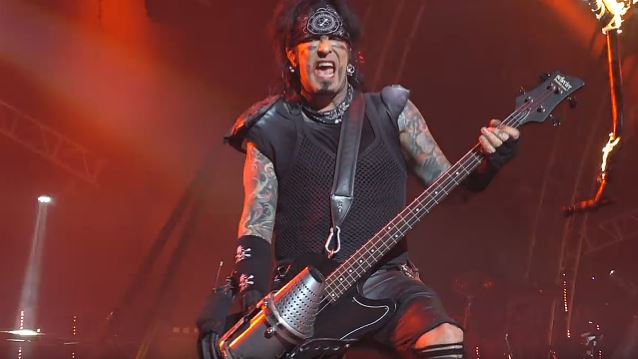 MÖTLEY CRÜE bassist Nikki Sixx says that he doesn't "see a purpose" to the band going into the studio to write and record new music after the CRÜE has played its final show at the of this year.

Asked by Cindy Scull of the Dallas/Ft. Worth, Texas radio station 97.1 The Eagle Rocks if the CRÜE was, in fact, "breaking up" after the December 31 concert at the Staples Center in Los Angeles, Sixx said (hear audio below): "In my opinion, yes, we're breaking up. We're done as a touring band. If you don't tour, you're not a band in a sense… Will we re-release our songs? Will they come out in movies?... But I don't believe we're a band anymore after that."

Pressed on whether there is a chance that MÖTLEY CRÜE will make new music even after playing its last show, Sixx said: "I don't personally see a reason why not. I mean, the door's not shut. But my belief is you make music to tour. And, you know, nowadays music is not the sole purpose anymore, even though we all love music [and] we live music. But what I'm doing right now with my other band, SIXX: A.M., I'm making a double album, and I'm gonna go on tour for two years. And music is a way to get people to come see the band to play the music for them, but in the end, the music isn't like what it used to be. Now you put a record out so you can tour."

He continued: "I think [MÖTLEY CRÜE will be] a brotherhood and not a band. We're gonna call each other and say things like, 'Hey, this movie's coming up. What do you think? We can put one of our songs in it. It'll be the tenth anniversary of us breaking up.' But I don't see a purpose to go in the studio and write songs."

MÖTLEY CRÜE's "The Final Tour" kicked off last year and will end New Year's Eve at the Staples Center in Los Angeles after one last round of North American gigs.