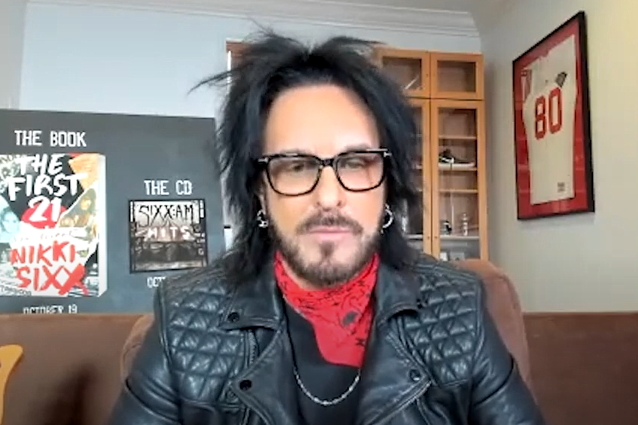 In a new interview with HardDrive Radio, MÖTLEY CRÜE bassist Nikki Sixx explained why he is not doing a book-signing tour for his new memoir, "The First 21: How I Became Nikki Sixx". Released on October 19 via Hachette Books, the book looks back at his formative years beginning with his birth in 1958 as Franklin Carlton Feranna to the date in 1980 — before the band was formed — when he legally rechristened himself Nikki Sixx.

"We're not doing a book tour because I don't wanna give the fans anything less than a full experience," Nikki said (as transcribed by BLABBERMOUTH.NET). "I really enjoy book tours. Some of the cities we go to, we get over a thousand people. Sometimes we'll be there from nine in the morning until… The store's, like, 'Look, we legally have to close,' and try to sign as quickly as possible.

"Things have changed over the years," he continued. "On early book tours, even with [MÖTLEY CRÜE's] 'The Dirt', people line up and you get the hug and you get the high five and they get the picture. Now it's gotten to the place where they're trying to keep it a little bit more organized. And I remember when they were, like, 'We can't really do the picture thing.' And then we tried to figure out a way around that. So I would be sitting there signing and they would turn and their friend would take a picture.

"We had 15 cities for this, and I was really excited about it. It came down to I wanna take photos, I wanna high-five the fan that is so connected to me they just want a hug, and I like that — I'm a hugger. I remember I went to hug [KISS's] Gene Simmons one day, and he goes, 'I'm not a hugger.' And I go, 'We're doing a co-headline tour, so you're gonna get hugged up a lot.' [Laughs]

"So we decided, in talking to all the retailers and management and myself and my family that it just wasn't the right thing to do for the fans — to stick five hundred, a thousand fans in a sardine can at this time, whether you're vaccinated or unvaccinated," Sixx added. "And then it was, like, what about my safety? I have a two-year-old [daughter]. So, what are we gonna do? Put a plexi glass wall up? That's kind of impersonal. What about the employees? So we opted out.

"It would be fantastic to be out there. It's one of those things that when this thing [the pandemic] finally gets in a headlock and starts to hit the knees and goes down and eventually goes away, or some version of away, I would like to go out with this book and do a book tour."

"The First 21: How I Became Nikki Sixx" entered the coveted New York Times list at No. 8 on the Hardcover chart and No. 11 on the Combined Print And Ebook List. "The First 21" joins Sixx's other three bestsellers, "The Heroin Diaries", "This Is Gonna Hurt" and the MÖTLEY CRÜE biography "The Dirt: Confessions Of The World's Most Notorious Rock Band". In addition, "The First 21" quickly rose to Amazon's bestsellers list since its release on October 19, occupying the top spot on Amazon's rock music books chart and in the Top 40 overall biographies and memoirs chart. "The First 21" was also No. 22 on USA Today's best-selling books top 150 list, as well as No. 9 on Canada's The Globe And Mail bestsellers list.