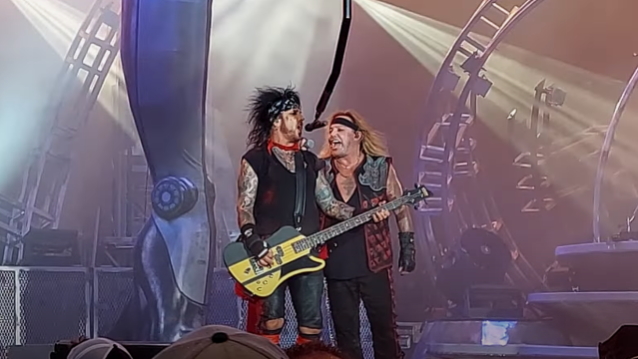 NIKKI SIXX Is 'Proud' Of TOMMY LEE For Performing With Broken Ribs: 'What A F***ing Animal'

"The fact that Tommy was told by the doctor to not play with 4 broken ribs & he beasted half our show is a miracle," Nikki wrote on Twitter earlier today (Friday, June 17). "We are a band and are proud of his strength. He is doing the whole tour and day by day adding more songs. What a fucking animal. Anybody out there ever break ur ribs?"

Lee played the first five songs of CRÜE's set and then left from behind his kit to address the crowd. "We did it! You did it. We did it. We're fucking here," Lee told the crowd, referring to the fact that "The Stadium Tour" had been postponed twice. "Two and a half years.

"Okay, well, anyway, what I've gotta tell you is about 14 days ago, I fuckin' broke not one, not two, not three, but four fuckin' ribs right here.

"I wish I had a fuckin' badass story, like me and Connor McGregor fuckin' scrapping out in some fuckin' bar or something. But I don't," he continued.

"Anyway, I hope you guys have a fucking great time," he added before introducing OZZY OSBOURNE/BLACK SABBATH drummer Tommy Clufetos, who took over for Lee for the remainder of the set. "My boy Tommy Clufetos back here, he's gonna help me get through this," Lee said. "'Cause the doctors told me, 'No playing, bro. No playing.' And I was like, 'Are you fucking high, bro? We've got a fucking tour to do.' So anyway, I ain't fuckin' sitting out for shit. My boy's gonna help me out here, and I'll see you guys later. On with the goddamn show."

In a message posted on social media, Lee voiced a similar sentiment, writing: "Man y'all ain't gonna believe this shit! I broke four fucking ribs! But I've been resting and healing and even though the doctor tells me I shouldn't play at all, you know I'm stubborn and I'll beast through the pain every show for as many songs as I can! And have No Fear my boy Tommy Clufetos is here to help me out until I'm back at 100 percent . . . We've all been waiting years for this moment and there's no way I'm missing this! On with the show!"

The next show on the trek is scheduled to take place this Saturday, June 18 at the Hard Rock Stadium in Miami Gardens, Florida.

The fact that Tommy was told by the doctor to not play with 4 broken ribs & he beasted half our show is a miracle. We are a band and are proud of his strength.He is doing the whole tour and day by day adding more songs. What a fucking animal.Anybody out there ever break ur ribs?