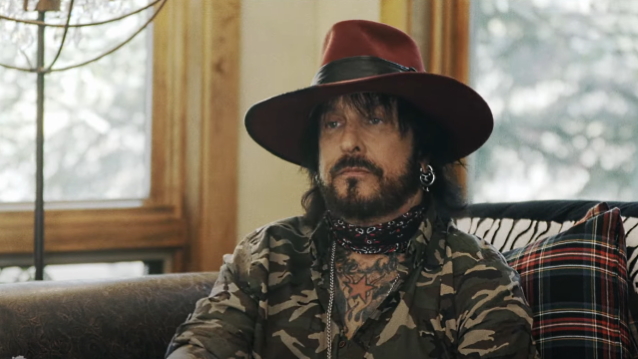 NIKKI SIXX On Moving To Wyoming With His Wife And Daughter: 'It Was One Of The Greatest Things We've Done'

MÖTLEY CRÜE bassist Nikki Sixx spoke to the "Lipps Service With Scott Lipps" podcast about his recent decision to leave Southern California, where he had lived for more than four decades, and relocate to Wyoming, the least populous U.S. state. He said (as transcribed by BLABBERMOUTH.NET): "[My wife Courtney and I] sold our house [in Westlake Village, California]. We sold all of our cars and sold all of our furniture and kept the stuff that was really important to us; we shipped it up to Wyoming and some stuff we still have in storage here. Like musical gear and stuff like that; I don't need to have 40 guitars in Wyoming.

"Moving up to Wyoming was something really great for me and my wife and also for how we wanted to raise our daughter," he continued.

"I had, a few years before we had been talking about getting pregnant, had been talking to some other parents, and they were telling me about their 12-, 13-year-old kids and that they were buying bulletproof backpacks. At the time, there was all this crazy stuff — there was earthquakes and fires and school shootings and fentanyl overdoses, and it was just getting so intense we kind of started a conversation about kind of a getaway place. And we looked all over the place for that idea. And then the pandemic came. We figured we would do something after [CRÜE's] 'The Stadium Tour', which was supposed to be two years ago. So while we were in lockdown in COVID, we kind of started just looking and seeing what was out there. And we looked at Idaho and Montana and been to Nashville on the set of [the CRÜE biopic] 'The Dirt'. Two guys in my band live in Nashville and I spent a little bit of time in Nashville on the set.

"So anyway, long story made short, Nashville was too far, one place there was nothing to do," Nikki explained. "And Courtney came up with this idea of Wyoming, and we started looking around, and then we ended in Jackson Hole. It was one of the greatest things we've done. We have a change of season, we're outside, we're fishing, we're hiking, we're skiing — just experiencing a different life than being in the city. And I can always go the city when I need it, like if I need to do work or band rehearsals start in May in Los Angeles; I'll be down [there] for a month."

Last month, Sixx sold his Westlake Village, California house for $5.18 million. The 62-year-old rocker and his 36-year-old wife and How2Girl founder spent $4.125 million on the home in 2014.

Sixx previously spoke about his move to Wyoming in an October 2020 interview with the 95.5 KLOS radio station. At the time, he said that his new home state is filled with "no-B.S. type of people." He explained: "Everybody is extremely outdoors-driven — fishing, hunting, hiking, going on the river, going up the lake. Everyone's extremely healthy. And there's no entertainment business here, so you're not dealing with any of that kind of stuff — you're just dealing with blue-collar people. I relate to it 'cause I came from Idaho in the '70s, which it's 40 minutes to Idaho from where we live. And it's a lot of the same environment. I go back, I go on the road, I still see these beautiful cities, but as far as being a musician and a painter and a person who writes books, I felt it was maybe time, and a better place to raise my daughter."

Sixx's comments echoed those he made a month earlier when he told SiriusXM's "Trunk Nation With Eddie Trunk" about what it has been like to live away from Los Angeles for the first time in decades: "It's great for the creativity. I feel like all kinds of ideas are just floating around the air. Kind of like Keith Richards said — he said he's never written a song; he just plays guitar all the time, and then the song just shows up. And that's kind of what it's like for me up here in Wyoming. I'm just writing, and stuff's turning into a book and stuff's turning into songs. And you don't know where it's going, and that's really exciting."

He continued: "I feel like being back in Los Angeles, everything is about business: When is the deadline? When do the rehearsals start? When does the tour start? When? When? When? And I'm, like, that's great — I understand — but I kind of need to step back and just let some creative juices flow. I don't know. Maybe I don't have any more songs in me; maybe I do. [There's] only one way to find out, and that's to be in a place that's not so chaotic."

MÖTLEY CRÜE's "The Stadium Tour" with DEF LEPPARD, POISON and JOAN JETT & THE BLACKHEARTS " was originally scheduled to take place in the summer of 2020 but ended up being pushed back to 2021, and then to 2022, due to the coronavirus pandemic which is sweeping the globe.