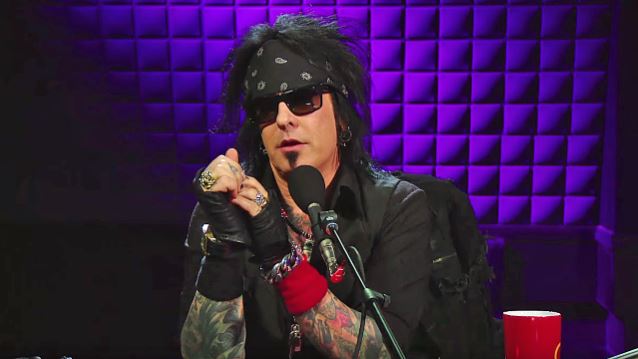 Shad of CBC Radio One's arts and culture program "Q" recently conducted an interview with MÖTLEY CRÜE and SIXX: A.M. bassist Nikki Sixx. You can now watch the chat below. A couple of excerpts follow (transcribed by BLABBERMOUTH.NET).

On what made MÖTLEY CRÜE so unique and popular:

Nikki: "We were four individual personalities. Tommy Lee is a great drummer, Mick's [Mars] a great guitar player, Vince [Neil] has the most unique voice. I think my songwriting and lyrics… It was a perfect time, a perfect storm. And that — what made us original — is also what made us understand it was time to disband.

"We have a live concert film coming out. I think it's called 'The End' at this point. But, you know, things change, but I like that. And Tommy said in there, you know, we're four strong personalities and it's hard to agree on stuff. That happens. It happens."

On how he feels about MÖTLEY CRÜE coming to an end:

Nikki: "I'm not sad. I'm not sad at all. I'm proud. I'm happy. I would have been sad if we would have stayed together another ten years and I would have been in here talking to you, and you go, 'So, tell me how it's going.' 'Well, I'm playing the rib joint down the street with just… only me and the band. And it's called MÖTLEY CRÜE III or something.' I like integrity. I'd really rather go out on my feet than my knees."

On MÖTLEY CRÜE's final show, which took place on December 31 at the Staples Center in Los Angeles, California:

Nikki: "It was hip. It was cool. Vince cried, which I thought was really special, 'cause I had seen Vince only cry a few times. That was really nice to see that. I felt ready. I felt proud. When I walking to the stage, I was, like, 'We did it.' When we played at The Starwood on January 17, 1981, nobody cared. We couldn't get a record deal. And I'd say we couldn't get arrested, [but] actually, the only thing we could get was arrested. Our first show ended in a fistfight in the audience, and it wasn't the band fighting each other; it was the band fighting people that were messing with us. And that was the heart and spirit of that band. And I was able to walk on that stage and go, 'This is the last night on earth for MÖTLEY CRÜE, and I'm really proud of where we're at.' And I wasn't sad. I was in the moment.

"I got off stage and I saw my kids and my wife and they were… I had a little dressing room and I had some catering for friends. And I walked in, and they were, like, 'How are you?' And I was, like, 'I'm great. Let me just get out of my clothes, and let's jump in the bus,' cause I was gonna go to Mexico the next morning for a much-needed vacation. And they go, 'Are you sad?' And I was, like, 'No. I guess I'm not. I'm happy.'

"I'm very compartmentalized as a man. Any time in my life I've had a relationship that ends, I actually… when it ends, it means it's really over. I will take a bullet for you. I will be there for anything and everything. But when it's over, it's over."

According to Billboard.com, MÖTLEY CRÜE's three final shows at the Staples Center in Los Angeles, California (on December 28, December 30 and December 31) were seen by 37,000 fans, generating $2.7 million in box office revenue and placing the trek at No. 2 on the weekly "Hot Tours" list of top-grossing tours.

To celebrate their mark in rock music's history and in honor of their devoted fans, the band has confirmed the release of a full-length concert film of the final performance, which will also include exclusive interviews and behind-the-scenes footage of the last week of the tour, to be released later in the year. Produced and distributed by Live Alliance, the concert portion of the film was directed by Christian Lamb, while Jeff Tremaine, creator of the "Jackass" series, directed the documentary segment. The film will premiere in theaters worldwide, one night only, followed by pay-per-view in all cable/satellite/digital formats, with a DVD set to be released later on.

In addition to the live-concert film, MÖTLEY CRÜE are planning to release a major box-set of music down the line, as well as "The Dirt" feature film based on the band's best-selling 2001 autobiography, also to be directed by Tremaine, in the near future.

MÖTLEY CRÜE first announced plans for their two-year "Final Tour" by signing a Cessation Of Touring Agreement at a press conference in Los Angeles in January 2014, solidifying the end of their touring career.