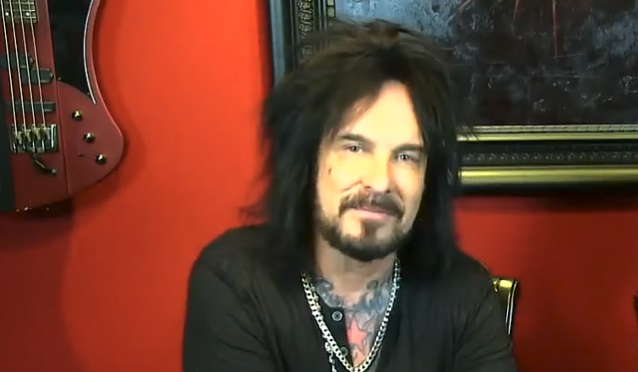 Nikki Sixx says that MÖTLEY CRÜE's self-titled album should have been released under a different band name.

Issued in 1994, "Mötley Crüe" was the band's only LP to feature singer John Corabi, who joined CRÜE in 1992 as the replacement for the group's original vocalist, Vince Neil.

Despite a Top 10 placing on the album chart, the record ended up being a commercial failure in the wake of grunge.

During a recent chat with rock and roll comedian Dean Delray, Sixx was asked if Corabi was the only singer who auditioned for the then-vacant vocalist slot in MÖTLEY CRÜE.

"We talked about different ideas for singers, and Corabi was one of those guys… I'm trying to think if anybody else came in," he said. "I don't really think anybody else came in. But John came in and he had this really whiskey voice, and he played rhythm guitar, which was really cool, because, obviously, Mick Mars being the only guitar player [in MÖTLEY CRÜE], when you have a second guitar, you can write different music. There's a big difference in a band with two different guitar players — you can create counter rhythms and stuff that you might do on a record but you can't do live. And it was a real exciting time. We jumped at that; we just jumped right in it and made a record. And I think it's a pretty good record."

Sixx continued: "My only complaint about that record is I believe it shouldn't have been called MÖTLEY CRÜE; we should have just taken a bullet, changed the name of the band, because when people got the record, they're, like, 'This doesn't sound like MÖTLEY CRÜE.' 'Cause Vince wasn't singing, and we kind of, musically, went into a little bit of a different direction. [It was a] great record, but, in hindsight, I wish we had called it THE DIRTY DOGS or something, and then whatever happened with THE DIRTY DOGS is that, and then you would go back to [doing your previous band]."

Less than two years ago, Nikki was more critical of "Mötley Crüe", telling Sweden Rock Magazine in an interview that writing the LP with Corabi was a prolonged and difficult experience. He went to call it "a very unfocused record" that was "painful for me, because John Corabi can't write lyrics, and I had to do all that work."

Corabi, who said he had no issues with any of the other MÖTLEY CRÜE members, went on to say that he didn't know "why, all of a sudden, now twenty-two years later, [Nikki] said what he said. I don't know.' I have nothing but admiration and respect for the record that I did with them guys. I even said I wished them the best of luck in all their future endeavors."

Corabi is planning to release a live album and DVD of his performance of MÖTLEY CRÜE's entire 1994 album, recorded in 2015 in Nashville, Tennessee.