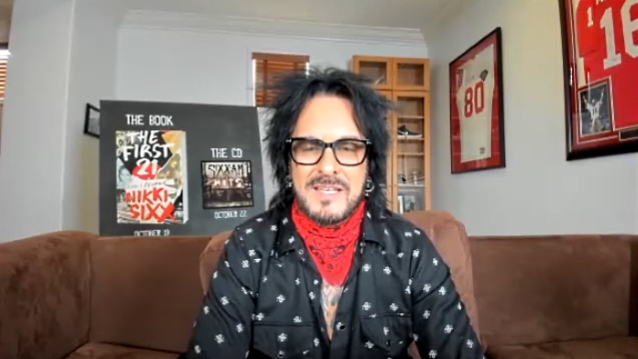 NIKKI SIXX: 'The Idea Of MÖTLEY CRÜE Not Being In My Life Feels Very Strange'

In a new interview with Anne Erickson of Audio Ink Radio, MÖTLEY CRÜE bassist Nikki Sixx was asked if he and his bandmates were surprised by the success of their "The Dirt" biopic. He responded: "Well, at that time, we'd been in the game 36 years — we're around 40, 41 years together now. We understand the allure [of] the moth to the flame. And it was accidental, but we were wired for fire and wired to fight and wired to drink and, in my case, wired to experiment with drugs. And there was no repercussions from destroying hotel rooms, rolled cars, drug overdoses, jail sentences. So when we survived ourselves and survived our youth, that became such a part of the culture of MÖTLEY CRÜE, and at times, frustrating, because we were, like, 'Have you heard how great the songs are that are on the new record?' And people were, like, 'Tell me about the time.' So, we knew that was gonna happen, that people wanted to watch the film for the blood and guts, but we also knew it was an opportunity to tell a story about a family, and that's my band. My band was my family after my family abandoned me."

As for what he thinks is the glue that has kept MÖTLEY CRÜE together all these years, Nikki said: "God if I know. [Laughs] I mean, honestly, I have no fucking idea. It's, like, I think we are on the plane, it's on fire, we're heading towards the mountain, we're gonna crash and burn, and then next thing you know, we're on another world tour, and we're together and we're getting along like brothers. And then it changes again. So we've been through so many versions. I think now that we're getting older... we're just happy to play together. [Laughs]

"I'm so lucky that I met Tommy [Lee] and Vince [Neil] and Mick [Mars], and they've changed my life, and I've hopefully helped change their life. And we, really, maybe changed a lot of other people's lives, even on an entertainment level. So, yeah, the idea of MÖTLEY CRÜEnot being in my life feels very strange."

Sixx is currently promoting "The First 21: How I Became Nikki Sixx", his new book which looks back at his formative years.

Two years ago, Sixx said that the CRÜE biopic sparked a renewed interest from younger fans who wanted to see the band live, contributing to the group's decision to renege on its infamous "cessation of touring" contract.

Released in March 2019, "The Dirt" currently has a 36% critic score from 74 reviews on Rotten Tomatoes, the online review aggregation service that allows both critics and the public to rate movies. The same site has an 94% audience score for "The Dirt" from more than 6,000 reviews.