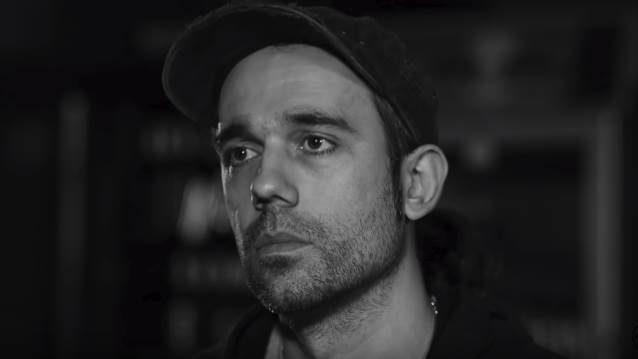 NILE's GEORGE KOLLIAS On Extreme Metal Drumming: 'It's A Really Demanding Style Of Music. I Enjoy It, Although I Suffer'

Drumtalk, the video podcast by German drummer and videographer Philipp Koch, conducted an interview with drummer George Kollias of South Carolina-based extreme technical death metallers NILE prior to their February 12 concert at MS Connexion Complex in Mannheim, Germany. You can watch the entire chat below. A few excerpts follow (transcribed by BLABBERMOUTH.NET).

On improving as a drummer:

George: "First, you need to find your weak spots and work on them. That's very, very important. Another thing would be try to get into different areas. For example, if you're a death metal drummer stuck in singles, unisons, sixteens for a lifetime, maybe get into a new style, whatever it is, it will be really, really good for your progress as a musician. It will open new windows on what you do in drumming. So, the most important thing for me is to do as many kilometers by playing the instrument. So, the daily approach with the instrument is the most important thing. Then, of course, practicing would be one part. Work on your weak stuff."

On being a professional:

George: "If you ask the people who know me since I was 12 years old, they would tell you I was always a pro. I always wanted my drum set, make sure the tuning and setup is great and be prepared as much as possible. I always look at my 'job' and I say 'job,' because for me, it's my life, it's my hobby, everything together — I always treat drumming in a very professional way. Nothing really changed when I became a real professional drummer, except the fact I got more familiar with the live situation. I knew how it was to play live and knew what I had to do to play better. Now, it's a daily thing. It works a little bit easier, that's all. And maybe get in this sponsorship and all this business, which is great. Like I said, whatever it has to do with drumming, I just love it."

On the physical demands of extreme metal drumming:

George: "You know, I heard this many times. People are like, 'Man, you look like you are pushing.' I'm like, 'This is why I am.' [Laughs] It's impossible for a band like NILE and just be relaxed, like you're on the balcony and drinking your coffee, there's no way, unless you're a tapper and you play on a [practice] pad or something, which unfortunately, it's a reality in our style, but for me, it's a live show I have to deliver, play as hard as possible. It's rock music at the end of the day. I'm pushing everything I have. People, yeah, people see it. I think it's very obvious. But the other thing is what's going on in your mind. It's not about the tempo. It's not about the click track. It's not about the riff. It's not about the signature. It's all together. So, I'm doing math and some signatures will be really against the flow. For example, if you do like a 270 bpm [beats-per-minute] blast beat. It's already really tough to do it with one foot and go that fast. But then we have odd parts, like sevenths and elevenths and ninths, and I have to find the motion because there is no more flow. So, for example, if you play sevenths, it's like [mimics time signature], the motion is a little more odd than the usual flow where everything rolls a little bit better and you can push to the next level. There are many different factors. It's a really demanding style of music. I enjoy it, although I suffer. [Laughs]"

On the nuances within extreme metal that sometimes go undetected to the average listener:

George: "Yeah, the vocals will definitely not give you that impression for sure. But, drumming-wise, I think I do what every drummer does. For example, when you play a back beat [mimics beat], you just play melody on the bell or the stack or whatever, I can do the same during blast-beats and this is why, which I prefer for my third book, which is really advanced. I have a huge chapter based on syncopation for the modern drummer and how to apply melody lines for blast-beats, bombs and everything. That will give you a new idea of what actually a blast beat is because many people think it's a very straight beat and actually it is. We can't really use that as example as a blast beat. We can, but it will sound like shit. There's always this fine line you can't really cross. How can you make a blast beat groove with the riff? How can you make the audience go like this [moves head]? For example, my guitar players play accents. So, what I can do will be to accent, but as soon as you take the right hand out of the ride cymbal or hi-hat, it depends on what you play, you will start to flam and go to flam-town with the kick and the snare. What you have to do is spend a lot of time playing kick and snare at the really high tempo. Make sure your kick is leading on the beat, which is on the metronome, then apply some melodies on the right hand. That will open really new windows, because, like I said, you can't really groove a blast- beat, dynamic-wise. The only thing I can do is accents. Even for a one-footer, it's really, really difficult, but not impossible."

On his career as an extreme metal drummer:

George: "I don't really feel the fame thing. No matter who you are to me, it doesn't really matter. The legacy you leave behind is what matters, but I don't really believe in the rock star thing. That's true. I don't believe in this and say it in the cameras — I think it's bullshit. Because I've seen a few things as well. Now, the more you grow and the bigger audience you draw and the more people you get, you get the stress level a little bit higher, for sure. When nobody knew me, I would list drum videos and some people would go, 'Oh, I like this.' Some other people, 'Now, it has to be perfect.' Even the video shooting, everything. There's a lot more stress because you feel like there are so many people waiting for the video just to, you know, pick on you. Like, 'Yeah, I saw this. I don't like this.' I don't know…maybe the more I grow up, I only see the negative comments, so I try to be a little more careful nowadays. It takes away a lot of the fun, I have to say that. I have so many videos ready, like jam videos, we're talking about hours, like hundreds of hours of material, but in order to release something in public, it has to have all this negativity eliminated. I try to stay focused and give something more neutral than my free-form extreme side, whatever. So, yeah, it's a little bit stressful."

NILE has written six songs so far for the follow-up to 2015's "What Should Not Be Unearthed" album. The upcoming effort is tentatively due in 2019 via Nuclear Blast. It will mark NILE's first release with new guitarist/vocalist Brian Kingsland, who replaced Dallas Toler-Wade last year.