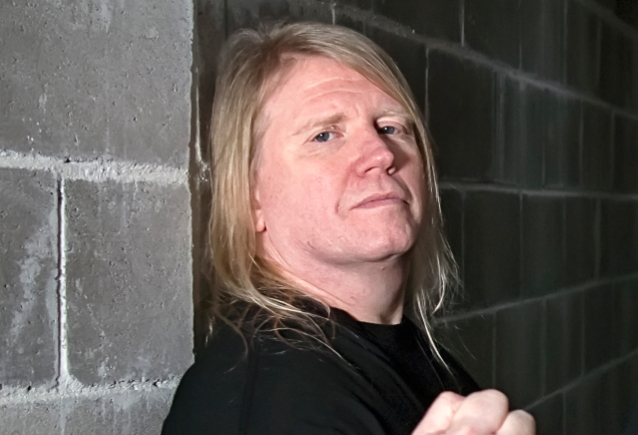 Karl Sanders, the driving force behind South Carolina's Egyptian-themed death metal titans NILE, was a guest on the latest episode of Nuclear Blast's "Saturday Night Lockdown" with host Francesco Paoli of FLESHGOD APOCALYPSE. Asked how he has been spending his coronavirus downtime, Karl said (see video below): "I started off going, 'Okay, this will be a great time to write some NILE songs.' So I did. I've been practicing like a maniac. But then I got going on my solo project, which took a little bit to get in the groove, 'cause it's a totally different mindset for that music than what I normally do with NILE, death metal — it's a whole different way of thinking."

Asked if he feels "inspired in these dark times," Sanders replied: "No. I felt very uninspired at first — hopelessness and despair. What's gonna happen to our world? What's gonna happen to our music scene? Those thoughts are really hard to push out of your brain, especially if you watch the news. If you watch too much news, that shit will rot your brain and turn you into a scared little animal. So I don't watch the news anymore; I, like, watch five minutes, and that's it… A lot of it is disinformation anyway. It's not helpful. I think it's very unhealthy. So fuck the news. I'm gonna play guitar."

Karl has released two solo albums so far, 2004's "Saurian Meditation" and 2009's "Saurian Exorcisms". The latter was described by the Charleston City Paper as " a haunting and, at times, beautiful instrumental journey into the world of Middle Eastern music."

Besides Sanders, the only other musician appearing on "Saurian Exorcisms" was Mike Breazeale, who contributes chants and some vocals.

At the time of "Saurian Exorcisms"'s release, Sanders said that his influences were more varied and far-reaching than NILE fans may suspect. "What I've been trying to do is move away from strict Egyptian kind of influences and incorporate a broader range of inspiration," he said. "The music I'm making is not strictly traditional Egyptian music. I borrow and steal from the traditional music of many different cultures. There's some Tibetan stuff, some Indian stuff, some Arabic stuff, and so forth."

NILE's ninth studio album, "Vile Nilotic Rites", was released last November via Nuclear Blast. The disc was recorded and produced by Karl Sanders at Serpent Headed Studios in Greenville, South Carolina, with the exception of the drums which were recorded at Esoteron Music Studios in Athens, Greece with engineering handled by Jim Touras and George Dovolos. The album was mixed and mastered by Mark Lewis at MRL Studios. For the album artwork, the band returned to artist Michal "Xaay" Loranc who has worked with the band for over 10 years.