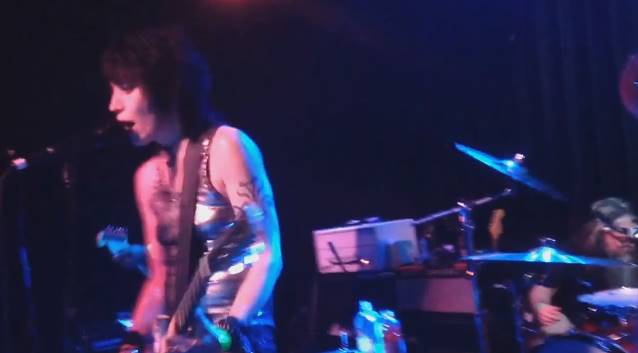 The surviving members of NIRVANA played a surprise concert at Saint Vitus, a tiny bar and music venue in the Greenpoint neighborhood of Brooklyn, New York, following their induction into the Rock And Roll Hall Of Fame on Thursday night (April 10). According to the New York Post, only 250 "close friends and insiders of the band were invited" to this super-secret show, which saw Dave Grohl, Krist Novoselic and Pat Smear perform a full set of NIRVANA classics.

Raw video footage of the Saint Vitus show can be seen below.

Setlist for the Saint Vitus show, according to Setlist.fm:

Former R.E.M. singer Michael Stipe inducted NIRVANA into the Rock Hall last night. He described the band's sound as "a sweet and beautiful but fed-up fury coupled with howling vulnerability." Grohl and Novoselic were joined on stage by NIRVANA frontman Kurt Cobain's widow, Courtney Love, and Cobain's mother and sister. Grohl told the audience: "I was the quiet one in NIRVANA. I was the drummer. Most of you don't know, I was the fifth drummer in NIRVANA." He went on to thank the four drummers before him.

Kurt Cobain's mother, nearly in tears, walked up to the mic and said, "I just miss him so much. He was such an angel."

Joan Jett joined Grohl, Novoselic and Smear in a performance of "Smells Like Teen Spirit". Annie Clark then performed NIRVANA's "Lithium", and Gordon performed "Aneurysm". The biggest surprise of the night was when 17-year-old Lorde came out to sing "All Apologies".