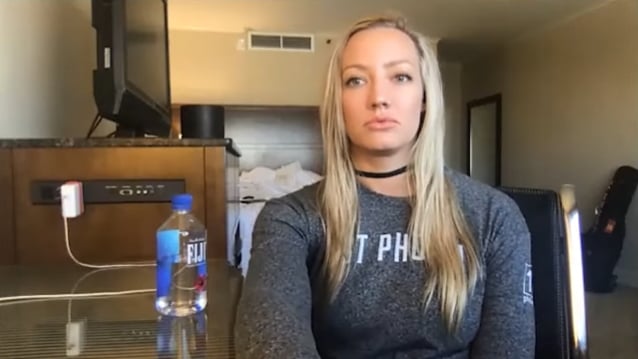 During appearance on "Guitar Autopsy", the video podcast hosted by Rusty Cooley, ALICE COOPER guitarist Nita Strauss spoke about how she managed to lose 50 pounds and get sober while on tour back in 2015.

"My whole approach to sobriety and health and fitness is to educate but not ever force," she said (as transcribed by BLABBERMOUTH.NET). "I wouldn't ever want it to be, like, 'You have to stop drinking. You have to do cardio every day,' or whatever. All I can share is really what worked for me, and that was alcohol was extremely, extremely detrimental in my personal life.

"I got sober in 2015 and I basically just decided to make the most of it and said, 'If I'm gonna do this, I'm gonna do it right,'" she continued. "And I switched from going to the bar after the show to going to the Barbell in the morning, for lack of a better term. [Laughs] I hooked up with great bodybuilding coaches that [helped] me [with] my diet and my workout while I'm on the road. I use the right supplements, I eat the right food. I have dieticians at RP Strength, I have a workout coach, I take all the right supplements, I drink my green drinks, I take all my vitamins and I stay on track. And the more I did it, people in our community — the rock and metal community — were starting to ask how I did it. And I was writing these long captions on my phone: 'First things first, you drink a lot of water…' da da da. And so I thought why not inspire people to do more. So I created 'Body Shred'. And 'Body Shred' is the first fitness challenge that I know of that is aimed at the music community."

Nita celebrated the sixth anniversary of her getting sober this past September.

A year ago, Strauss credited her longtime boyfriend and manager Josh Villalta with helping her live her life without alcohol. At the time, she wrote: "I thought I needed a drink for just about everything. To be confident on stage. To be social after shows. To celebrate. To mourn. To take the edge off frustration or the sting out of a bad day. To relax and laugh at lunch with girlfriends, or watch football with the guys on Sundays. I was terrified that my life was going to change, that without alcohol I wouldn't be ME anymore, that I would lose my circle of friends, and my onstage charisma, and become someone else. ALL those things happened... but not in the way I thought they would.

"Change came first in my relationship, in the form of less fighting and drama, and more productivity, peace and love. Thank you @thejoshv for being the catalyst to the best thing I ever did for myself. I love you.

"The ME that I was before would have stayed up until 6 am at the bar or in the bus front lounge. The ME that I became would rather get up at 6 and get to the gym before starting the day.

"My busy circle of friends was almost immediately reduced to a core 3. I've learned that when it comes to friendships, quality is ALWAYS better than quantity. If your friends have no interest in spending time with you after you make a change for the better, they weren't your real friends.

"My first show without alcohol was in front of 15,000 people. I felt like a scarecrow someone had propped up on stage to scare birds. Nothing felt natural. I was going through the motions, with this absurd idea running through my head 'everyone is looking at me. Everyone knows.'

"I went out by the bus to talk to fans afterward, and do you know what they said? 'Wow you were so great! Where do you get all that energy? You add so much to Alice's band!'

"ALL of that insecurity, ALL the fears, ALL the doubt was in my head. Those are your demons that make you think you need them.

"I'm content to sit at the bar, order a soda water with lime and watch the game now. I wouldn't trade back to my old life for anything."

Back in 2018, Nitaspoke openly about how she got finally sober in September 2015, saying that her boyfriend has always been "a tough-love type" in the way she approached her sobriety. "He's, like, 'Look, you're on this path, and I support you, but I'm not changing the way I do things at all," she explained in an interview with "Chasing Glory With Lilian Garcia". "And I'm kind of glad, in retrospect, that he did that, because it threw me into the fire and showed me, like, 'Hey, you can be [around people who are drinking] and not drink.' He has continued to drink throughout [this entire period], but he didn't want me to drink, because when I would drink, I would start fights and I would get emotional and I would overreact to stupid things, like you do when you drink — it's part of drinking; it heightens all your emotions and everything." Nita also revealed that she has never participated in Alcoholics Anonymous (AA) to help her stay sober.

Nita's debut solo album, "Controlled Chaos", was released in 2018 via Sumerian Records. A follow-up effort will arrive next year.