Nita Strauss, the Los Angeles-based guitar shredder for the ALICE COOPER band, will embark on the "Winter Wasteland" solo tour next month. The trek will kick off on November 10 in New Orleans, Louisiana and conclude on December 18 in Angola, Indiana.

Nita commented: "Because who needs time off after the last year and a half??! Where will we be seeing you??!!!"

In a May 2021 interview with Kylie Olsson's YouTube show "Life In Six Strings", Nita spoke about the progress of the writing and recordings sessions for her follow-up to 2018's "Controlled Chaos" solo debut.

"That's been really an interesting experience, writing and being creative when you really are sort of stuck in this bubble and you have no stimuli to get you inspired to do things," she said, referring to the coronavirus crisis. "It's been an interesting process being creative in this time, but ultimately I'm really proud of how everything is coming out. I think it's some of the most interesting stuff I've done musically. And I've been focusing a lot more on the song. My first album was kind of, like, 'How much cool guitar stuff can I do?' And this time there's a lot of cool guitar stuff, if I do say so myself, but there's also a lot more of a focus on the song and the songwriting and the journey that it takes the listener on. I've been working with different songwriters and producers to sort of help me refine my skills in that area and not just be vomiting guitar all over the song. [Laughs] And it's been a really good growth process for me. So I'm really happy with how it's coming out."

Asked if her second album will once again be an all-instrumental effort, Nita said: "I will have some guest singers on it this time. There are a couple of names that are attached that, one in particular, if this happens, will be a really, really crazy crossover that people wouldn't expect, and then some of the others more people that vibe with my personal style. But whatever it is, I can promise you it will not be boring and it will not be what you would expect."

Strauss went on to say that she happily delegated some of the responsibilities with the production and engineering side of the upcoming album to other people. "The first one, I did absolutely everything, and that was more out of stubbornness than anything," she explained. "I wanted to make my own statement; I wanted to do it all myself. I didn't want any external influence telling me how it should be done. So I produced it, I engineered it, I played everything that I could play. I'm not a good enough drummer or keyboard player to play that stuff, but anything that I could do myself I did. And this time around, I'm really happy to take a step back from the engineering bit of it and really just focus on being a guitar player and songwriter. So I'm still engineering my own guitars, I still engineered the keyboards and stuff like that, but I'm not gonna be engineering the drums. When Josh [Nita's longtime boyfriend, manager and drummer Josh Villalta] goes in and plays the live drums, I'm not gonna be the one miking them this time, so you're welcome. [Laughs] And then the same thing with the vocalist. I don't know how to record vocals. I feel no ego about taking a step back and letting somebody that really knows what they're doing do it. I think that's good growth for me, because I would have stubbornly flailed around on my own until I made it sound decent. And now I'm really just happy to step back and embrace the process and work with some really good people."

Nita also confirmed that she will not handle any lead vocals herself on the new LP. "I can hold a tune enough to sing a little bit on the Alice tour, but I'm not a good enough singer to actually sing a whole song," she said.

In April, Nita told Wrestling Inc. managing editor Nick Hausman that her next LP will feature a guest appearance by one of her "favorite female singers out there on the scene right now." 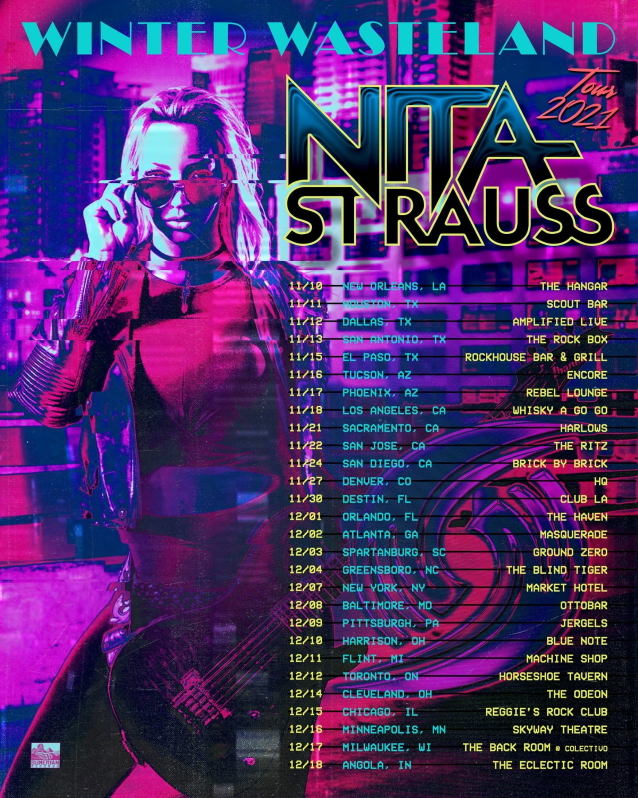 It’s been a long time, but the wait is almost over……..
The first single from my next solo album drops this month 💀

Do you guys want an instrumental song first or one with a guest vocalist??