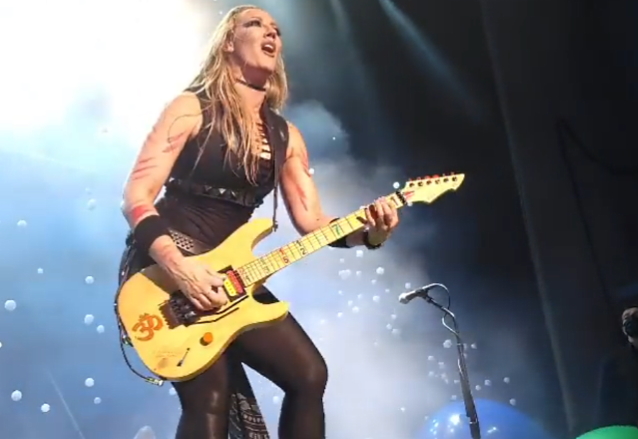 Earlier today, Nita shared an Instagram video of her playing the guitar, and she wrote in an accompanying message: "It's taken me 12 hours to find the words. What an incredible honor and a privilege it was to get to play @jasonbeckerofficial's original Numbers guitar on stage for a song last night. This guitar truly has Jason's magic in it… I felt like I couldn't miss a note if I tried!!! I was in tears walking off the stage thinking what that moment meant. I don't know when that guitar was last used on stage!! But I am so grateful to have had this opportunity!!

"Jason told Josh [Villalta, Nita's boyfriend, who also plays drums in her solo band and manages her career] and I years ago that he wanted his guitars to continue being played. At the time I was struck by how unselfish that thought was- there was no sense of bitterness, just that same joy and love of guitar that we all associate with Jason and his playing. Now that I've played it a couple times- I get it. I do.

"I hope I did it justice last night.

"Thank you to Benny @the_neurotic_guitarist for making this happen."

Jason's "Numbers" guitar is the first prototype Peavey made for Becker. A similar model was later put into production, but this was the first "Numbers" model ever made. During a visit with Jason, Eddie Van Halen played this guitar, and during the months-long virtual fundraiser for Jason, this guitar was played by Steve Vai, Tosin Abasi (ANIMALS AS LEADERS),Herman Li (DRAGONFORCE),Chris Broderick (ex-MEGADETH),Tim Henson (POLYPHIA) and Jason Richardson (ALL THAT REMAINS). The guitar was also thumb-printed by Jason.

Becker — the composer, virtuoso musician, and former child guitar prodigy — has been suffering from ALS for more than 30 years, but that hasn't stopped him from creating music. His latest album, "Triumphant Hearts", was released in 2018, after Becker composed the music via computer using his eyes and enlisted heavy hitters like Marty Friedman, Joe Bonamassa, Joe Satriani, Uli Jon Roth, Neal Schon, Jeff Loomis and Paul Gilbert to play the parts.

A child prodigy on guitar, Jason rose to prominence as a teenager when he was one half of the technical guitar duo CACOPHONY, with his great friend Marty Friedman. In 1989, at only 19 years old and after wowing audiences all over the world, the young virtuoso became the guitarist for David Lee Roth, following in the huge footsteps of Eddie Van Halen and Steve Vai. He wrote and recorded on Roth's third solo album, "A Little Ain't Enough", and was poised for superstardom when a nagging pain in his leg was diagnosed as Motor Neurone Disease (MND),also known as Amyotrophic Lateral Sclerosis (ALS),or Lou Gehrig's Disease, the same condition Stephen Hawking lived with for over five decades. It is a fatal condition with a life expectancy of maybe five years. Maybe.

That was more than 30 years ago. He lost the ability to play guitar, walk, talk, and breathe on his own. But never lost his will to live or his desire to create music. Communicating through a series of eye movements with a system developed by his father, Jason spells out words as well as musical notes and chords. He imparts his musical vision to his team who then can input the notes into a computer, edit the parts to his exacting standards, and then generate charts for session musicians. His inspiring music and life story have been the subject of countless news articles and magazine cover stories.