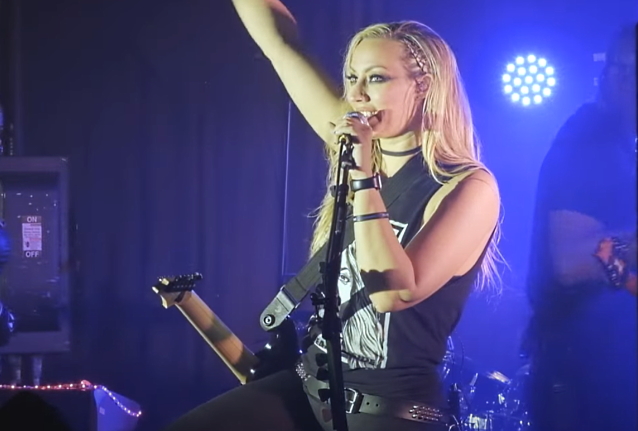 Nita Strauss, the guitar shredder for the ALICE COOPER band, has shared a nine-minute video recap of the fall 2021 leg of her "Winter Wasteland" tour, which kicked off on November 10 in New Orleans, Louisiana and concluded on December 18 in Angola, Indiana.

Nita wrote in a message accompanying the YouTube release of the clip: "Some memories from our return to the stage after a year and a half off! It was so great getting back out there and seeing so many of you out on the road!"

Earlier this month, Nita spoke to Terrie Carr of the Morristown, New Jersey radio station 105.5 WDHA about the progress of the writing and recording sessions for her follow-up to 2018's "Controlled Chaos" solo debut. She said (as transcribed by BLABBERMOUTH.NET): "The album is almost finished being recorded. We are just waiting on a couple of singers. Guitars are done, drums, bass — everything is finished.

"This is my first time collaborating with vocalists on anything, so it's a bit of a waiting game — it's testing my patience a little bit — but it's all worth it in the end," she continued.

"We're gonna do half and half — so six instrumental tracks and six tracks with guest vocalists."

In a separate interview with "The Mistress Carrie Podcast", Nita stated about her decision to make the upcoming LP "half vocal songs and half instrumental: "I did feel, and the label and everybody agreed, it's still important for me to keep my identity as a guitar player and not just branch off too much and go, 'Okay, well, now it's just guests.' Let me still have a little of what makes me me, which is the instrumental shred stuff. And the instrumental pieces that I've written on this record are, I think, better than anything I did on the first one — definitely more… I don't know if it could be more emotional but they're very emotional pieces of music and I think a little better crafted this time around. So I think all the songs in general are more well thought out, better put together this time around. And I do have some of my absolute favorite [singers guesting on it]. I have three amazing powerhouse female vocalists on this album so far. And there are still a couple of things T.B.D. [to be determined]. And then we should be ready to release next spring."