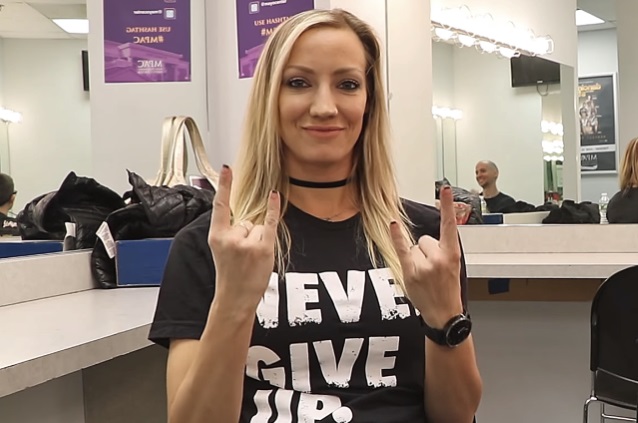 NITA STRAUSS: The 'Most Valuable Thing' I Learned From ALICE COOPER

Elliott Fullam of Little Punk People conducted an interview with guitarist Nita Strauss of Alice Cooper 's band this past Friday, March 9 at the Mayo Performing Arts Center in Morristown, New Jersey. You can now watch the chat below.

Asked what the "most valuable thing" is that she has learned so far from being in Alice 's band, Nita said: "I think the most valuable thing is definitely how to treat people. Playing with Alice is an amazing experience because he loves what he does. He just turned 70, and to see somebody that is that age… I'm 31 and he outperforms me every night. It's amazing. And the way that he treats people, the way he treats his fans, the way he treats people that come up to him on the street… He does a meet-and-greet… I see other bands do their meet-and-greet and they'll just bring people through, like, 'Hey, picture, you're done. Hey, next picture, you're done.' Alice will sit and talk to people for, like, five or 10 minutes. Sometimes we're waiting on him on the bus for, like, an hour or two, because he stays and spends time with people and appreciates people, and I think that's really, really valuable."

Strauss made her name with THE IRON MAIDENS, FEMME FATALE and LA Kiss prior to hooking up with Cooper.

Nita joined the legendary rocker's band in 2014 as the replacement for Orianthi.

In January, Nita launched her new signature guitar, the Ibanez JIVA, at the NAMM show in Anaheim, California.