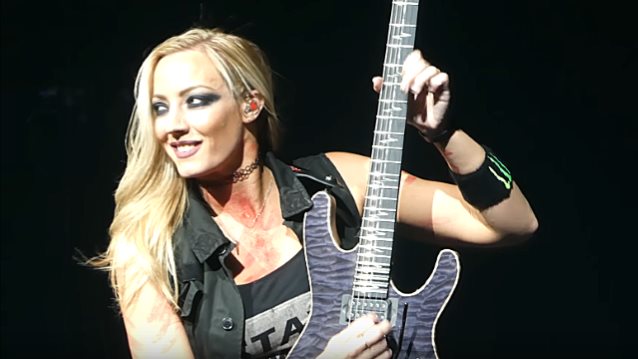 NITA STRAUSS: 'You Can Go Out There And Be A Hot Chick And Shred It Up On The Guitar'

"I'm so excited," she said (see video below). 'It's cool to be out there performing my own music. I've been a hired-gun guitar player for so long. And I love writing music. I love writing heavy stuff. I love writing riffs. But I always felt like there was a lack of really good musicianship in all-female bands.

"There's been a lot of great all-female bands… you talk about THE RUNAWAYS and HEART and THE DONNAS and KITTIE and VIXEN and what have you, but you don't really see super technique," she continued. "You don't hear great guitar solos and fast double bass."

Asked why she thinks all-female rock bands have not been as musicianship-focused as some of their male counterparts, Nita said: "I don't know. I really couldn't tell you. It's not 'cause you're a girl, you can't do it. And I will say I think as a female musician, people tend to… there's a lot easier road to just go, 'Oh, she's a chick. She can just go and bang out some stuff on a guitar and have an attitude and it's enough.' And people will tell you it's enough. You have to have that drive yourself to push yourself over that hump and be, like, 'No, it's not enough. I wanna play technical stuff. I wanna do guitar solos. I wanna do fast double bass.'"

She continued: "We have a keyboard player [in WE START WARS] that went to Berklee [College] Of Music. This singer that I have has this huge, huge rock range and can sing anything from opera to really great rock stuff. So when I put this lineup together… The other guitar player plays an eight-string, like super-djenty, heavy, crazy tight right hand. I wanted to find musicians that just have a super high level of musicianship, so you can have it. 'Cause it exists, and there's no reason not to put us all in a band together. So that's kind of what I did with WE START WARS."

In addition to Nita, WE START WARS features Alicia Vigil (VIGIL OF WAR) on bass, Seana (a.k.a. Shauna Lisse) on vocals, Nicole Papastavrou on guitar, Katt Scarlett (FEMME FATALE) on keyboards and Lindsay Martin on drums.

Strauss told Sixx that she has "been in a lot of all-female bands, 'cause I've always had this strong passion for showing off female musicianship, whether it's THE IRON MAIDENS, the cover band I was in. I have another all-female cover band now called THE STARBREAKERS with Jill [Janus] from HUNTRESS and Courtney [Cox] from THE IRON MAIDENS and Lindsay, my drummer in WE START WARS, and that's another one just doing PRIEST and MEGADETH and METALLICA… a KING DIAMOND song," she said." 'Cause I feel so strongly that someone needs to be out there pushing this idea that, hey, there can be girls... You can go out there, you can look however you want, you don't have to dumb down your look, you can go out there and be a hot chick and shred it up on the guitar. Like Lindsay, my drummer, is this super-cute little blonde 24-year-old that plays double bass in Doc Martens like any dude out there. It's amazing! I feel so strongly that that needs to be pushed out to the forefront that people can see not only are there a lot more female musicians out there, but there are really technically solid female musicians out there."

WE START WARS made its live debut on May 25 at the Whisky A Go Go in West Hollywood, California. Quality video footage of the concert can be seen below (courtesy of Jim Antera Ross).