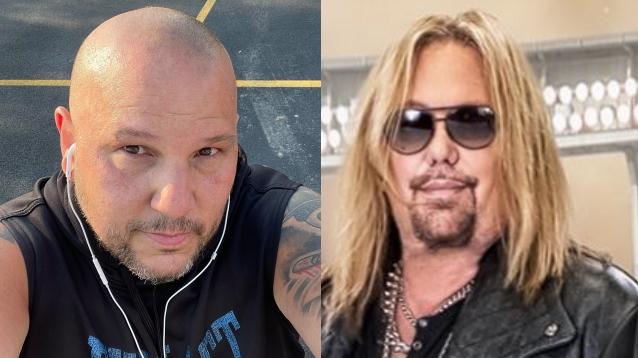 On May 29, the MÖTLEY CRÜE singer struggled to complete his solo concert at the Boone Iowa River Valley Festival in Boone. Based on fan-filmed video footage of the gig posted on YouTube, the 60-year-old rocker, who hadn't performed in more than a year and a half due to the COVID-19 pandemic, began losing his voice several songs into his set, which consisted exclusively of CRÜE classics and cover songs previously recorded by the band.

Rivera discussed Neil's return to the stage during a brand new interview with Sofa King Cool. He said (as transcribed by BLABBERMOUTH.NET): "I feel bad for Vince. MÖTLEY CRÜE is such a great band. He's got a year to get it together for [the 2022 start of CRÜE's 'The Stadium Tour' with DEF LEPPARD and POISON]. And it's sad, but I still love MÖTLEY CRÜE regardless. I know he's had some struggles, and getting older, stuff like that, it happens. Not everyone can be a Rob Halford, or like Ronnie James Dio before he passed — he was still singing at a high level. You have to take care of yourself. I don't know Vince personally, but I hope he takes the right steps. 'Cause I know that DEF LEPPARD and MÖTLEY CRÜE together is gonna be an amazing tour. Anybody who lived that era, it's gonna be like high school all over again."